Ricky Burns vs. Michele Di Rocco possible for May 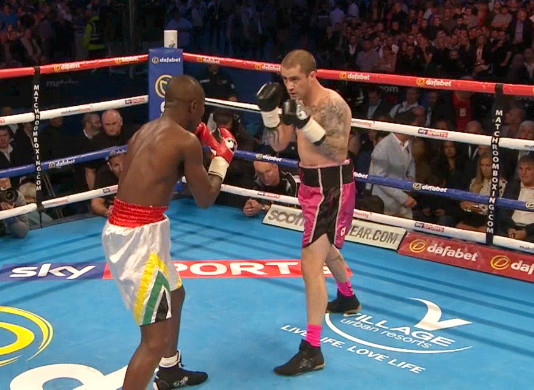 It makes sense for the 33-year-old Italian Di Rocco to be fighting for the title, but it makes zero sense for Burns. He’s not ranked in the top 15 by any of the sanctioning bodies at light welterweight, and he of course isn’t ranked by the World Boxing Association.

It’s hardly fair to the contenders that are ranked by the WBA at 140 like #1 WBA Jose Benavidez, #3 WBA Mauricio Herrera and #4 WBA Ruslan Provodnikov. Burns is ranked #2 by the WBO at 135 and #15 by the WBC.

“Despite reports that’s it’s done we are still talking regarding Ricky’s next fight,” Hearn said to skysports.com. “There are plans to bring world championship boxing back to Glasgow and if we get our way we will be bringing a major event and opportunity for Ricky back to the city in May.”

Burns has turned his career around recently with back to back wins over Josh King and Prince Ofotsu. Those are not high quality fighters, but technically, Burns has turned his career around because he stopped losing. It’s kind of sad that his promoter had to drop down to weak opposition to stop Burns from losing, but what can you do? Burns’ career was imploding badly after he was beaten by Terence Crawford, Dejan Zlaticanin and Omar Figueroa.

If Burns’ promoter Eddie Hearns had kept putting him in with top quality fighters, we likely would have seen Burns quickly turned into a journeyman in no time flat. But thankfully, Burns has picked up a couple of wins over the obscure Ofutsu and King and he’s now in the position to fight for the vacant WBA light welterweight title in May despite not being ranked by the sanctioning bodies in the 140lb division.

As far as I can tell, Di Rocco’s resume is totally inflated with soft opposition. He was knocked out in the 7th round by Giuseppe Lauri in 2007. Since then, Di Rocco has won his last 23 fights. His wins in the last nine years have come against Alexandre Lepelley and Carlos Winston Velasquez. Those guys are pretty much easy marks.

You can’t blame Di Rocco for him being ranked highly in the division. It’s the WBA that chose to give him an inflated ranking based on wins over fluff opposition. However, I don’t agree with the WBA’s rankings at all. I don’t think Di Rocco deserves to be ranked above Herrera, Provodnikov, Adrian Granados, Thomas Dulorme.

I don’t think those are great fighters, but they sure as heck deserve to be rated above Di Rocco in my view. In looking at Di Rocco’s resume, I don’t think he should be rated in the top 15 at all, period. His opposition is just too elementary for him to be ranked in the top 15. I see him as someone who started his career with soft opposition in 2004, and he just never made the transition to 1st tier. Now Di Rocco is getting a shot at the vacant WBA “regular” light welterweight title. That just seems wrong in my view. Di Rocco should be fighting some kind of eliminator or fighting contenders from the 140lb division. Burns isn’t a contender at 140. He’s just a lightweight that is trying to rebuild his career after a number of defeats.

“I’m very happy for Ricky to get a chance of winning a third world title,” manager Alex Morrison told STV. “It’s a great chance for Ricky to resurrect his career and I’m happy he’s fighting an Italian because there is a big Italian community in Glasgow.”

Adrien “The Problem” Broner is the WBA “Super” light welterweight champion. He’ll be fighting on April 1 against second tier fighter Ashley Theophane. I’m not too enamored with that fight, as I think the WBA shouldn’t have sanctioned it as a title fight due to Theophane not being rated in the top 15 by any of the sanctioning bodies.

If Burns loses to Di Rocco, then I think it would be a good idea for Burns to think about retiring from the sport, because I don’t see where he can go to turn things around. Yeah, Hearn can put Burns in with a ton of fodder opposition and maybe he’ll get an inflated ranking off those wins like we’re seeing with Di Rocco, but I sure as heck can’t see Burns beating anyone good at 140 or 135. Hearn can certainly get Burns the fights with the top guys, but if all he’s going to do is lose the fights, then why bother?

« When special plans go to heaven