Luis Ortiz looking for a new opponent for March 5 fight 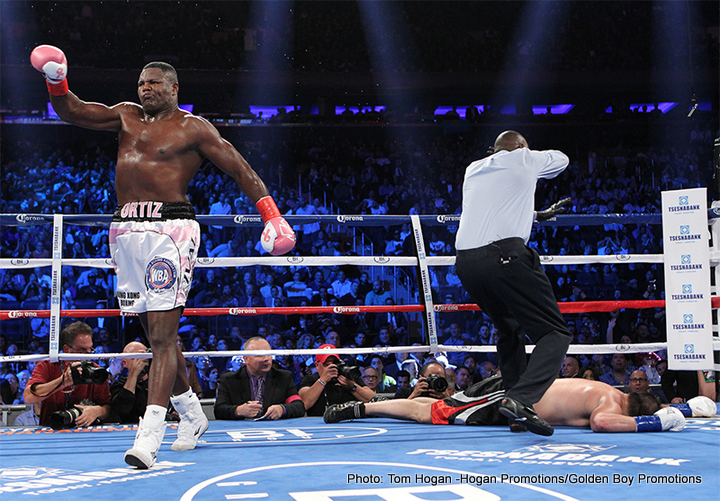 By Tim Fletcher: Interim WBA heavyweight champion Luis Ortiz (24-0, 21 KOs) is looking for a new opponent for his March 5 fight on HBO after his previously scheduled opponent Alexander Dimitrenko (38-2, 24 KOs) reportedly pulled out of the fight.

According to ESPN, Dimitrenko wanted more money to take the fight after initially agreeing to the deal. You can’t blame the 6’7” Dimitrenko for wanting to be well paid for a fight against the hard hitting Cuban Ortiz, because this guy is not an easy fight.

Ortiz could very well be the best heavyweight in the division right now. He’s getting up there in age at 36, and obviously won’t be able to keep at the same he’s at right now for too much longer. But for now, Ortiz would be a tough customer for anyone in the division.

Ortiz’s promoters at Golden Boy Promotions has struck out with the following heavyweight contenders as potential opponents for Ortiz’s March 5 date: Andy Ruiz, Bermane Stiverne, Alexander Ustinov, Carlos Takam, and Andrey Fedosov. With only one month to go before Ortiz’s fight on March 5, it’s not likely that Golden Boy is going to be able to find anyone good that can take the fight. It wouldn’t be a big deal if the fight wasn’t going to be televised on HBO. It would be disappointing if Ortiz has to face a lesser opponent on HBO.

“I thought we had a deal and expected the fight to be made,” promoter Greg Cohen said to ESPN.com. “In the 11th hour unrealistic financial requests were made and I immediately notified Golden Boy of the change of heart. To their credit, [Golden Boy] did come up with a structure to pay him more money in an effort to keep the fight intact, but the kid was unwilling to sign a contract. Very disappointing.”

The 6’4″ Ortiz looked very good recently in stopping former world title challenger Bryant Jennings in the 7th round last December. Ortiz fought with a flu, but was still able to show a lot of skills in that fight Afterwards, Ortiz coughed continuously while being interviewed by HBO. That performance might have scared away all the top contenders in the division. Ortiz might have looked too good for his own good.

The co-feature bout is a good with one unbeaten welterweight Sadam Ali facing former WBA light welterweight champion Jessie Vargas. This might be a better option for the main event if a suitable opponent isn’t found for Ortiz to fight.