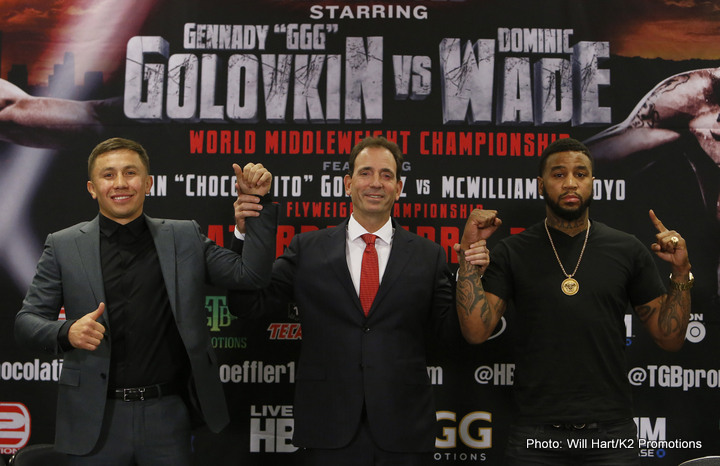 By Dan Ambrose: Promoter Tom Loeffler is taking a wait and see approach with WBC middleweight champion Saul “Canelo” Alvarez as far as whether he’ll choose to defend his title against interim WBC challenger Gennady “GGG” Golovkin later this year as mandated by the World Boxing Council. Loeffler, who promotes Golovkin, believes that Canelo is too proud to just give up his WBC title without a fight by facing Golovkin. Loeffler doesn’t think that Canelo is the type to vacate his WBC title in order to avoid Gennady.

If Canelo chooses not to face Golovkin, then he’ll be stripped of his WBC title and Golovkin will be made the new WBC middleweight champion, according to Loeffler.

What Loeffler doesn’t realize is that Canelo will be able to walk away from the Golovkin fight without taking much criticism from the boxing world if he gives Golovkin his conditions for the fight and he refuses them.

I’m talking about the 155lb catch-weight handicap that Canelo has been using for the last couple of years. He seems to be really dependent on that handicap despite the fact that he’s considered to be a very big middleweight in terms of weight, and clearly doesn’t need any kind of weight advantages over his opposition.

If Canelo makes it clear that he’ll only agree to fight Golovkin at a catch-weight of 155lbs, then he probably will not take much heat from fans if Golovkin refuses to fight at that weight. Canelo can then move on without being blamed by the fans because it’ll be Golovkin who refused.

“According to the WBC’s rules, the winner of Canelo vs. Khan has to fight the winner of Gennady vs. Wade,” said Loeffler to Thaboxingvoice. “So there’s no wriggle room at that point. At one point you can look at it, ‘well, Cotto got a couple of defenses. Now, Canelo is getting a defense.’ Again, you can’t force them to fight. If they choose to fight somebody else, then it’s clear. The WBC won’t recognize them as champion anymore, and Gennady, as the interim champion, will be recognized as the new champion. I think Canelo is a very proud champion. Having the WBC middleweight championship as a Mexican fighter, that’s a great accomplishment. But I think there’s going to be a lot of pressure from the fans. They want to see the best fights possible. Canelo’s proven that he’ll take risky fights for much less money than he’d get to fight Gennady. This [Canelo vs. Golovkin] is the biggest fight in the sport of boxing. If Canelo beats Khan and Gennady beats Wade, that’s literally the biggest fight. Both fighters are going to gain from that. There won’t be any excuse for that fight not to happen,” said Loeffler.

Whether the fight happens or not will be up to Golovkin. He has the chance to put a lot of pressure on Canelo by agreeing to his catch-weight handicap that he’s been using. If Golovkin agrees to the 155lb weight limit for the fight, then Canelo won’t be able to say much. He’ll have to take the fight at that [point because it would look really bad if he came up with another hoop for Golovkin to jump through.