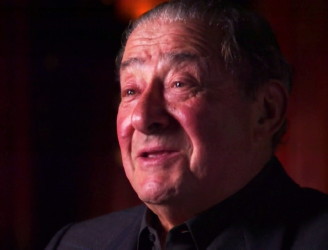 By Chris Williams: Top Rank promoter Bob Arum failed to match his aging star Manny Pacquiao against WBO light welterweight champion Terence Crawford in order to have Pacquiao be a stepping stone for Crawford to turn him into a star.

It’s unclear if it was Pacquiao who turned down Crawford or if Arum decided he didn’t want to throw Pacquiao to the young lion with him coming off of a shoulder injury and a loss to Floyd Mayweather Jr. in his last fight. Arum is now interested in having the soon to be 43-year-old Juan Manuel Marquez (56-7-1, 40 KOs) face Crawford later on this year if Marquez’s injured knee holds up in his tune-up fight in the summer.

Marquez’s name has been linked with Miguel Cotto for a fight later on this year. I’m not sure why Marquez would agree to the 84-year-old Arum’s plan to have him fight a non-star like Crawford. It doesn’t make sense at all. If you’re Marquez, why would you want to fight a guy with no fan base like Crawford? It’s a win-win fight for Crawford and Arum, but not a good deal for Marquez.

“Marquez wants to fight in the summer in Mexico City,” Arum said via ringtv.com. “He said the knee is fine. We’ll put him in a fight in Mexico City and then if he comes through that fight we’ll match him in a real marquee fight — maybe against a guy like Terence Crawford (at 140 pounds), assuming he’s victorious here.”

I don’t think Crawford is a “real marquee fight” like Arum says. That’s a fight that helps Arum and his Top Rank stable, because it helps increase the value of Crawford by sticking him in with an old lion on his last legs. There’s no way Crawford loses that fight. But isn’t Arum matching Crawford against Viktor Postol? That’s the only fighter that makes sense in the division for Crawford. Arum probably won’t match Crawford against Adrien Broner, because he’s not in his Top Rank stable. It’s not a doable fight.

Crawford is mainly popular in his hometown of Omaha, Nebraska. Arum has been feeding him short guys lately in Dierry Jean, Thomas Dulorme and now Hank Lundy. Those are not big names, and Crawford is just spinning his wheels by not going anywhere in terms of picking up new fans.

Arum needs to step it up already with Crawford and match him against Viktor Postol and then move him up to 147 to have him face whoever Top Rank is capable of putting him in with.

Sadly, I hope that Arum has more ideas than just putting Crawford in with Brandon Rios and Jessie Vargas over and over again in endless rematches. Crawford is friends with Tim Bradley, so that means no fight between those two guys. That’s too bad because I could see Arum sticking the two together for four or five fights,

Marquez has been dealing with a knee injury since 2014. Even now, it’s unclear whether his knee has healed or not. I guess we’ll find out when Marquez takes his tune-up fight in the summer against an opponent still to be determined.

“Marquez is really more of a junior welterweight,” Arum said. “I mean the idea of him fighting Cotto doesn’t make any sense. Cotto is a much bigger guy.”

I don’t believe that Marquez feels that Cotto is too big for him. I bet he doesn’t care, because it’s a good money fight for him, which is more than I can see for a Marquez-Crawford fight. That’s not a big money fight.

I think Arum is kidding himself if he thinks that Marquez is going to fight Crawford. I don’t see it happening because there’s no upside for Marquez. Crawford hasn’t been facing big names since he turned pro other than little former featherweight Yuriorkis Gamboa, who shockingly staggered the much bigger Crawford in their fight two years ago. Arum hasn’t put Crawford in with the big names, and because of that it’s kept him from becoming a star. If Marquez were to fight Crawford, he would be doing him a HUGE favor because there’s a big imbalance in terms of experience and name recognition. Marquez is much better off taking the Cotto fight rather than facing Crawford.