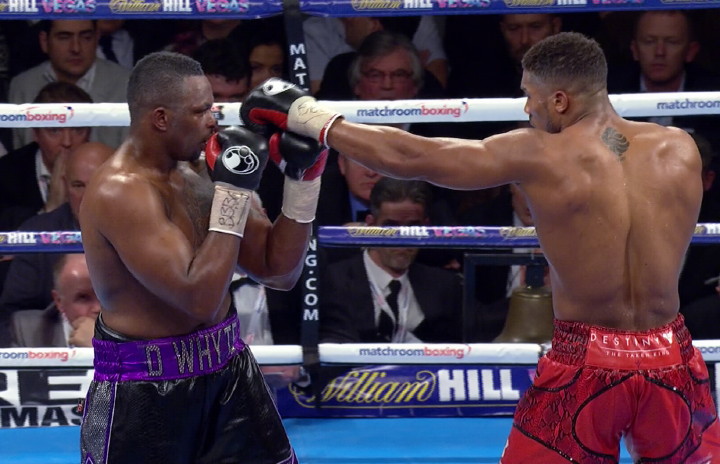 By Scott Gilfoid: Moments ago, Matchroom Sport promoter Eddie Hearn announced that 26-year-old Anthony Joshua (15-0, 15 KO) will be challenging IBF heavyweight champion Charles Martin (23-0-1, 21 KOs) in a fight on April 9 at the O2 Arena in London, UK. The Martin-Joshua fight will be televised on Sky Box Office pay-per-view. You can make an argument that the fight isn’t worthy of PPV, but given that Joshua is already fighting guys like Dillian Whyte on PPV, I guess this is something the British boxing public will gladly pay to see as well.

This is a big step up for the 6’6″ Joshua, who hasn’t done much to earn a world title shot other than beating 15 lesser fighters after turning pro in 2013.

For the 29-year-old Martin, he’s putting himself in a tough situation in agreeing to defend his own IBF title on foreign soil rather than insisting that #4 Joshua come to the United States to fight him in his own home country. However, Hearn obviously made it worthwhile for Martin to fly over to the UK because the money he’s going to get will likely be considerably more than what he would have been able to pocket had he made a simple title defense against one of his top 15 contenders in the U.S.

Martin’s problem is that WBC champion Deontay Wilder and IBO/WBA/WBO belt holder Tyson Fury are already on course to defend their titles against other opposition. If they weren’t busy, then they would have been perfect for Martin to fight in a unification match. With neither of those guys available to fight, Joshua is the best option for Martin in order to get a nice payday. Besides that, it’s a winnable fight for Martin because Joshua has zero experience against quality opposition, and his stamina is still very much in question.

Joshua was gasping for breath after just two rounds in his last fight against Dillian Whyte last December. Joshua also was staggered in the 2nd round of that fight, and might have wound up getting knocked out if Whyte hadn’t injured his shoulder in that round. Joshua ended up winning the fight by a 7th round knockout, but it’s impossible to say how it would have ended up had Whyte not suffered the shoulder injury. Joshua won the vacant British heavyweight title with that victory. He had already possessed the Commonwealth heavyweight strap after beating a very limited fighter in Gary Cornish by a 1st round knockout last September.

“Fighting for the Heavyweight World title has been a dream of mine since I turned professional,” said Joshua. “I feel privileged to have the opportunity to turn that dream in to reality. Not only that, having the chance to fight for it in my home town at The O2 and live on Sky Sports is unbelievably exciting. Charles Martin is a great fighter and a hungry competitor so I am going to have to produce the performance of my career to claim that belt.”

I wouldn’t go so far as to say that Martin is a great fighter. I mean, he’s a decent quality fighter, but he’s not in the same league as Deontay. There’s a worlds of difference between those fighters. But what Martin has going for him in the Joshua fight is stamina, high work rate, excellent size, and superb stamina. The stamina and high work rate could be a problem for Joshua because he’s put on a lot of muscle since he turned pro three years ago, and he resembles a bodybuilder now more than a fighter. Joshua hasn’t tested himself by going 10 hard rounds, and we just don’t know what he can do if a fight is dragged out into the later rounds. Martin has a good chin, and that could help him weather one of Joshua’s early storms in this fight. Joshua likes to bum rush his opponents in the first three rounds of his fights and just let everything go. If Martin is able to make it through the first three to four rounds, Joshua could be fighting on fumes and have nothing left in the tank. The southpaw Martin could then finish him off with some of his nice left hand shots to the head.

“I told my Team I wanted the best challenger possible for my first defence and Anthony Joshua’s name kept coming up,” said Martin. “I’m coming to the UK to make a statement that I am the best heavyweight in the world and no-one is taking my title. “I’m World Champion, so that doesn’t mean just sit back and make easy defences in the US, it means facing the biggest challenges out there. I respect Anthony Joshua and everything he has accomplished, but on April 9 he’s getting knocked out.”

You have to respect Martin for taking on an unbeaten fighter like Joshua in his home country of the UK. That takes a lot of courage for a fighter to go to another fighter’s home country and fight in front of what will likely be a hostile audience. Joshua is one of those fighters that feeds off the crowd noise, and he’s going to be psyched up to the extreme to try and get a quick knockout. Martin is pretty courageous to want to take the fight, because I wouldn’t have recommended him doing this. The last thing Martin needs is to go over to the UK and wind up losing by a controversial decision or a stoppage. I can just picture the referee jumping in and stopping the contest after Joshua throws a flurry of arm punches that are all blocked by Martin. I’ve seen too many quick stoppages in the UK for my taste. Martin is going to need to make sure that he keeps throwing punches back, because if he goes turtle in the ring, the referee might stop the fight and give Joshua the victory if he throws a flurry of shots he usually does. I’m just saying. Martin had better keep throwing punches back if he doesn’t want to be stopped on his feet in a controversial stoppage.

Miguel Cotto could fight for a world title in June »