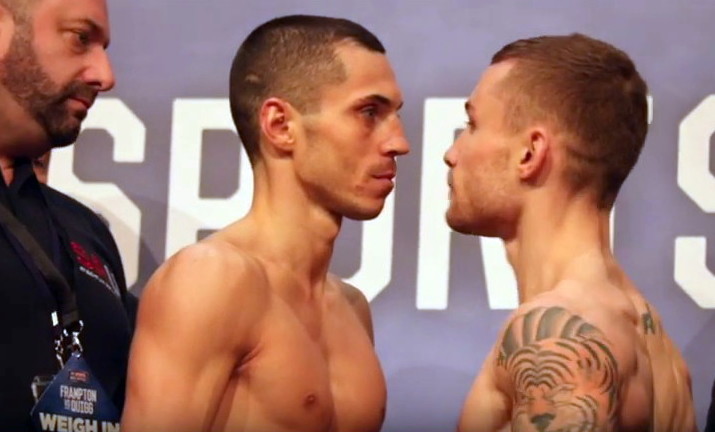 It was supposed to be the other way around. Many boxing fans questioned whether the 28-year-old Frampton would be able to make weight, as he has looked heavy lately with his walking around weight. In between fights, the 5’5” Frampton reminds me of a short Saul “Canelo” Alvarez with his stocky frame. But to Frampton’s credit, he took the weight off during camp and looked incredible today at the weigh-in.

There were no signs at all of Frampton looked drained. I wish I could say the same thing about Quigg. He had the appearance of someone who had been limiting calories and fluids during the past week in order to make weight, and he did not look healthy. I mean, look at Quigg’s neck in the photo and in the video.

Quigg’s neck looks almost bird-like in appearance. That’s a huge departure from what he normally looks like. Quigg’s neck looks so thin that I have my doubts that he can even take a healthy shot without it rattling his head. You have to have a strong neck to help your head from bobbing in complete disorder when you are nailed by big shots.

Quigg’s neck looks like it will not keep his head still if he is even tapped by a jab from Frampton on Saturday night. Taking all that weight off really did something to Quigg’s neck from what I can see. He needs to work on strengthening it or something because his neck is excessively thin in my opinion. It is too late now though. Quigg has no time to build up his bird-like neck before the fight.

Quigg’s promoter Eddie Hearn is talking about playing mind games to try and get to Frampton and his team before Saturday’s fight. How sad. What happened to the old ‘be a good sport’ motto?

“I would like this to drag onto 5pm to be honest with you, because they are rattled. I think it’s quite funny,” Hearn said via skysports.com about picking out the gloves, ring size and other such technicalities before the fight.” It’s not going to jeopardize the fight at all in my opinion. They can threaten it to and we’ll see. I find it quite amusing.” 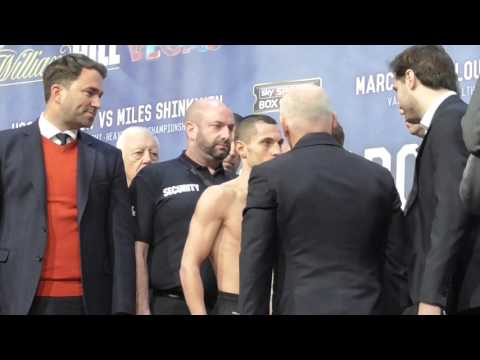 Look at this, will you? Hearn is stooping to mind games to try to get an edge for his fighter Quigg. I guess he must have questions about his ability to get the job done with Frampton, so he is resorting to try every trick in the book to get Frampton and his team all worked up before the fight. I do not think it is going to work.

Frampton, 28, has obviously been around for a long time, and he’s well aware of the tricks that different fighters use to try and gain an edge before they enter the ring. What’s interesting here is that Quigg’s promoter Hearn is the one doing the tricks more so than Quigg himself. What does that tell you? It tells me that there’s some fear there on Hearn’s part. You have to realize that Quigg is one of Hearn’s best little money fighters.

If Frampton brings him down on Saturday night by whipping him and clowning him in front of the entire world, Hearn could see a big drop off in interest from boxing fans in Quigg’s future fights. We’ve seen that in the past with fighters after they get blasted out or totally dominated. Their fan base disappears like rats from a sinking ship.

Fans want to see winners, not losers. As such, it will not be good for Hearn if Quigg gets crushed by Frampton on Saturday. All the kings’ horses and all the king’s men won’t be able to put Quigg back together again. I am just saying. It’ll be potentially bad for Hearn. I could see him taking a hit on his future revenue stream with Quigg after this one.

“There are even more coming up. We’ve got the rules meeting, we’ve got the gloves selection, the ring hasn’t been erected yet,” Hearn said. “They are going to look at the size of the canvas. I think they will have the tape measure out as well. It’s frustrating.”

Keep it together, Hearn. Don’t go to pieces on us.