(Photo credit: Team Sturm) By Scott Gilfoid: 37-year-old Felix Sturm (39-5-3, 18 KOs) will get his shot at revenge tonight when he faces WBA World 168lb champion Fedor Chudinov (14-0, 10 KOs) in a rematch at the Koenig Pilsener Arena, in Oberhausen, Germany. Sturm lost a 12 round split decision nine months ago to Chudinov in May of 2015.

The World Boxing Association is letting Sturm get a rematch, even though it was a clear decision win by Chudinov the last time out. It should have been a unanimous decision win instead of a split decision, because there is no way on earth that Sturm deserved a victory in that fight because he was just taking punishment.

Nevertheless, the oddball scoring by one of the judges showed how hard it is to beat Sturm, because he just seems to get lucky much of the time except when he has been soundly beaten or knocked out.

What Chudinov, 28, has going for him in this fight is his punching power and high work rate. With his nonstop style of punching, he’s going to make it awfully hard on the judges to mess this one up by giving the decision to the wrong guy. Sturm is likely going to be busted up or wind up with a badly swollen face in this fight. He took a great deal of punishment last time he fought Chudinov, and I have my doubts whether he has fully recovered from that beating.

When you take a pounding as Sturm did last May, it has a way of aging you. I would not be surprised in the least if Sturm is not the same fighter that he was in that fight. Heck, Sturm was not even good in that fight. He was being badly outworked by Chudinov, and taking massive punishment.

The World Boxing Association needs to think raising their criteria for their rankings and for who they allow to fight for world titles, because Sturm is not someone I see as worthy of being ranked at No.3 by the WBA. That is some kind of upside down ranking if you ask me. I mean, Sturm has not won an actual fight in three years. Gosh, how do you rank Sturm at No.3 when his last win came in 2013 in beating Darren Barker? 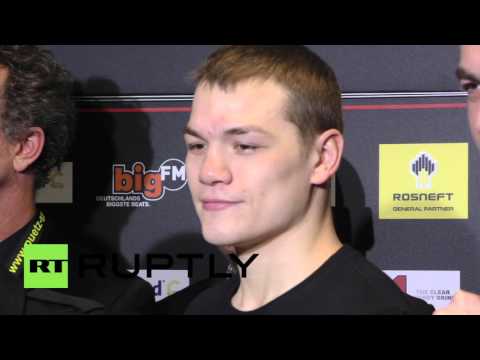 That was a fight in which Barker suffered a hip injury and the fight had to be quickly halted. The last real fight in which Sturm won was in July 2013 in beating someone named Predrag Radosevic. I cannot say I ever heard of this fighter before he fought Sturm. Before that fight, Sturm lost to Sam Soliman by a lopsided 12 round decision in February 2013 and by Daniel Geale by a 12 round split decision in September 2012. Sturm beat Sebastian Zbik in April 2012, but I never rated Zbik at all. He is the same guy that Julio Cesar Chavez Jr. easily beat.

I see Chudinov as being much too active and far too powerful for the aging Sturm to handle in this fight. Chudinov is younger at 28 than the 37-year-old Sturm, and he has a far better engine. Sturm only seems capable of fighting hard for one minute of every round three-minute round.

« Khan – when in Vegas, gamble

Canelo v Khan – what will it prove? »