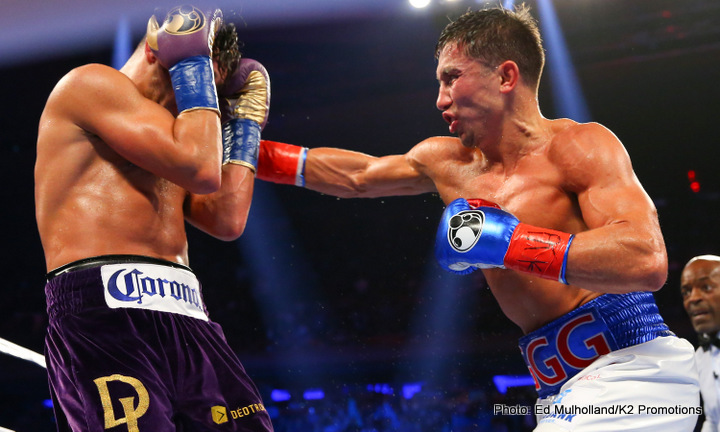 Trout believes that Golovkin has been getting matched up against fighters that are perfect for his fighting style. In other words, Golovkin has been fighting guys that stand directly in front of him so that he can get his shots off. The only fighter that had speed that he faces was Willie Monroe Jr., who didn’t have the punching power to keep him from overwhelming him, says Trout.

“Absolutely,” Trout said to skysports.com, when asked if he would be interested in fighting Golovkin. “There are a lot of people that are down to fight Golovkin. It’s just not the right people that Golovkin wants. I understand he feels like he is on a superstar stage, but Erislandy Lara has been calling out Golovkin for a year now.”

Lara would be a tough fight for Golovkin because of his hand speed, movement, power and counter punching. I believe that Golovkin’s promoters at K2 likely see it as a fight that would be an ugly one potentially. Yes, Golovkin would eventually catch up to Lara and likely stop him with a body shot, but it would be a difficult fight along the way because of the movement of Lara. We saw how Martin Murray was able to run from Golovkin for 10 rounds until he finally caught Murray against the ropes in the 11th round and stopped him on his feet. Lara is even more of a runner than Murray, and it would be a hard for Golovkin to catch up to the mobile Cuban fighter.

Lara’s fighting style is really negative with him using a lot of movement, and not someone that would make it an interesting fight for the boxing fans. It’s not a fight that would interest the casual boxing fans, and that’s a problem because Golovkin’s promoters at K2 Promotions are trying to turn him into a star in America. Fighting Lara would seem like a waste of time.

Lara, 32, hasn’t helped his career by staying at 154 for so long. He rehydrates to the 170s like Canelo does, so there’s no excuse for Lara not to be fighting in the middleweight division where he could possibly make more money. The only trouble with Lara fighting at middleweight is the risks involved for him. The guys are bigger and stronger than the mediocre fighters that Lara has been fighting in the junior middleweight division, and he might not be able to excel in the same manner. However, if Lara wants the bigger fights against guys like Golovkin, then he’s going to need move up soon before Lara ages out.

Lara’s game is based on speed and movement. He’s heading for his mid-30s now, and you can expect him to start slowing down soon. That’s why needs to move up in weight now to see what fights he can get in the 160lb division.

“If you look at everyone he has fought, they just all stand right there. The one guy (Willie Monroe Jr) who had good speed, had absolutely no power to keep him off,” Trout said. “They are feeding him [Golovkin] the perfect guy to make him look great, which I’m not mad about. I wish I had it so easy.”

Golovkin wants to fight the top fighters in the 160lb division like Peter Quillin, Saul “Canelo” Alvarez, Miguel Cotto and Daniel Jacobs, but thus far, he’s had no luck in getting any of them to fight. Those fighters, by the way, aren’t mobile guys. Austin Trout would find out that the mobile fighters at 160 are not doing so well. It’s the guys with punching power that are the top dogs in the middleweight division.

I don’t think Golovkin would be too worried about fighting likes of the southpaw Trout (30-2, 17 KOs), who doesn’t have much punching power and was beaten by Saul “Canelo” Alvarez and Lara in 2013. Trout has since won his last four fights, albeit against weak opposition. Trout has not looked good since his loss to Canelo.

Trout, #2 WBO, would like to get a title shot against unbeaten WBO junior middleweight champion Liam Smith, but thus far, he’s being ignored by him. Trout will likely need to wait until he’s the No.1 WBO mandatory challenger before he gets a crack at Smith, because he would be a tough out for the British fighter.

« Deontay Wilder: You will respect me!