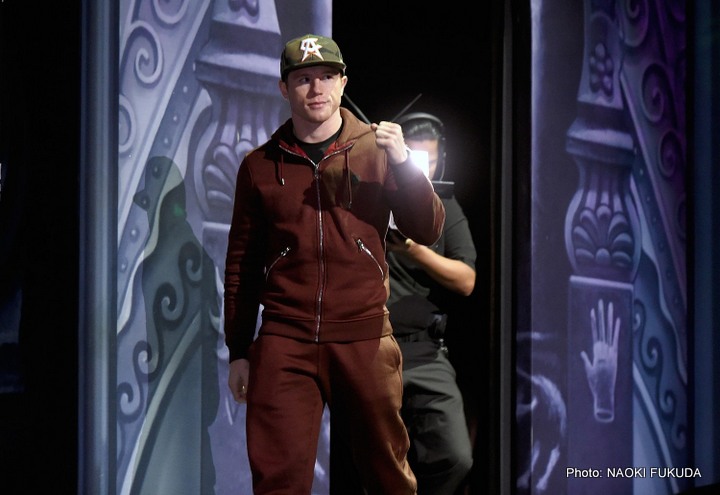 It’s unknown whether Canelo would be fighting for Smith’s WBO 154lb title, or if Smith would move up in weight to fight for Canelo’s WBC middleweight title at a catch-weight of 155lbs. Even if the fight takes place at 155lbs, Smith will likely lose his WBO 154lb title. I can’t see the World Boxing Organization letting him keep his WBO 154lb title if he gets whipped by Canelo at middleweight.

It’s a fight that doesn’t make much sense as far Canelo getting a body that the American boxing fans are familiar with. Canelo’s next fight is supposed to be on HBO pay-per-view in the United States. I mean, if Canelo fights a little known fighter like Liam Smith, that would be a fail as far as pay-per-view buys go.

I personally wouldn’t want to pay $60 to $70 to watch Canelo beat up on a little known fighter that many boxing fans see as a paper champion at 154. Further, Canelo would likely have a HUGE weight advantage over Liam Smith if that fight takes place. Canelo looked like he was 185lbs in his last fight against Miguel Cotto. Smith doesn’t rehydrate much for his fights, so I could see him out-weighed by at least 15, possibly 20 pounds by Canelo. But it would be a mismatch even if Smith did weigh as much as Canelo.

“We’re contemplating an offer from Alvarez,” said Smith’s promoter Frank Warren via skysports.com. “We’re looking at that, we’ll think about it and see where we go. We’ll see, I’m not going to get in too much detail – it’s a big fight for Liam and there’s other big fights out there for him. We’re looking at it.”

The only appeal I could imagine there being for a Canelo-Smith fight is the British pay-per-view money that might be on the table for Canelo. If Canelo could whet his beak in some of the British pay-per-view cash from a fight against Smith, then it might be worthwhile to fight him. The other names that have been mentioned as potential opponents for Canelo are Americans Willie Monroe Jr. and Gabriel Rosado.

Neither of those fighters are pay-per-view worthy opponents in my view, and both were knocked out by Gennady Golovkin not too long ago. Canelo has some pretty awful choices in terms of potential opponents. His promoters at Golden Boy are not going to put Canelo in with anyone that could maybe beat him like Andy Lee, Peter Quillin, Daniel Jacobs or the Charlo brothers. I don’t think Golden Boy is going to put Canelo in with Al Haymon fighters. I could be wrong, but I think that would be a show stopper. Lee isn’t with Haymon, but he’s just too dangerous for a guy like Canelo.

« David Haye: It’s my destiny to regain the heavyweight championship

Rigondeaux not likely to get Frampton-Quigg winner »