Tony Thompson vs. Malik Scott this Friday on PBC on Bounce TV 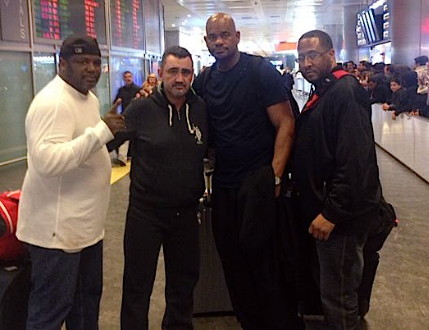 By Tim Fletcher: 44-year-old #9 WBC heavyweight contender Tony Thompson (40-5, 27 KOs) will be looking to add another scalp to his resume this Friday night against 35-year-old Malik Scott (37-2-1, 13 KOs) in a 10 round fight on free television in the main event on Premier Boxing Champions on Bounce TV at The Venue at UCF, located behind the CFE Arena in Orlando, Fla.

Thompson can’t afford another loss if he wants to get another title shot. He was beaten last year by Carlos Takam by a 12 round unanimous decision. Thompson rebounded from the loss by defeating Orlanier Solis by an 8th round knockout last February in Turkey. This was the second time that Thompson beat Solis.

This is a decent fight for Thompson, but not nearly a big enough fight for him to get pushed up the rankings. He needs to face someone better than that if he wants to get a title shot in a hurry. However, there’s still a slight possibility that Thompson could get a crack at WBC heavyweight champion Deontay Wilder.

If Thompson looks good in beating Scott, he could have a chance of getting selected by Wilder’s adviser Al Haymon for Wilder’s next title defense. It’s not an ideal fight for Wilder though because he needs to face someone shorter to get him ready for his title shot against his WBC mandatory challenger Alexander Povetkin. Wilder needs to be ready for that fight because it’s potentially going to be a tough one.

“It’s great to be fighting on PBC on Bounce in a heavyweight fight like this,” said Thompson. “I’m not looking past Malik Scott because he’s an experienced and crafty fighter. I think most fighters will stay away from a style like Malik’s but everyone knows I will fight anyone. I’ll be looking to make a statement against him by pressing the action and keeping him out of his comfort zone.”

Scott has had mixed results in his last four fights in knockout losses to Deontay Wilder and Dereck Chisora. Those defeats were quick ones with Scott folding in the 1st and the 6th rounds respectively.

Scott did get a nice win over former world title challenger Alex Leapai in his last fight in October 2014 in beating him by a one-sided 10 round unanimous decision. Scott’s previous win before that was against journeyman Grover Young in winning a 2nd round knockout in January of 2014.

The other fights on the card are as follows:

« Arum: Pacquiao’s last opponent down to Crawford, Khan or Bradley