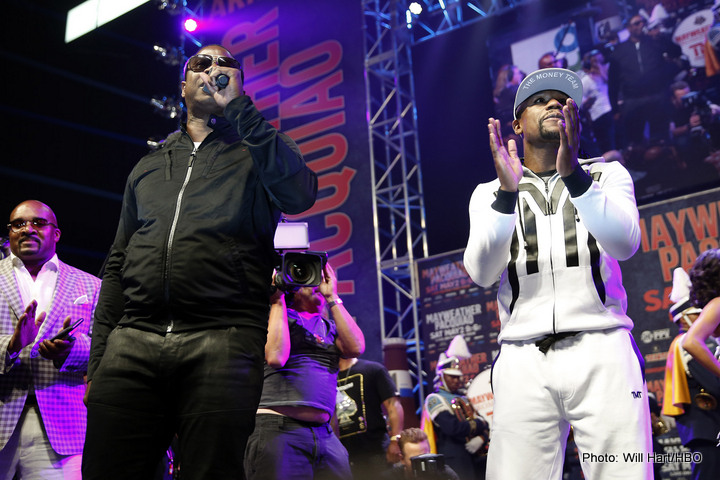 By Chris Williams: In response to the recent statement from Manny Pacquiao (57-6-2, 38 KOs) that he’s in negotiations with Floyd Mayweather Jr. (49-0, 26 KOs) for a rematch next year in 2016, Mayweather says that is “totally false,” according to ESPN. He says he’s retired and he’s not coming back to the sport.

The 36-year-old Filipino surprised boxing fans recently when he said that he was in negotiations with Mayweather for a rematch. This is the second time in the last couple of months that Pacquiao has done this, and it makes you wonder where his head is at right now.

Pacquiao’s promoter Bob Arum is saying he wants him to fight his farewell fight against his Top Rank stable fighter Terence Crawford, but Pacquiao keeps talking Mayweather. That suggests to me that Pacquiao isn’t on board with Arum’s vision of fighting Crawford. Arum needs to get a clue and start looking in another direction for Pacquiao.

“I don’t know yet who my opponent is next but we’re still negotiating right now about the rematch with Floyd Mayweather so hoping for that,” Pacquiao said this week.

Why is Pacquaio continuing to say that he’s in negotiations with Mayweather when it doesn’t seem to be reality based? Instead of giving Pacquiao cover by agreeing with him, Arum is denying that there are negotiations going on with Mayweather. Arum keeps speaking about wanting Crawford to be the one for Pacquiao to fight.

Is Arum trying to ram Crawford down Pacquiao’s throat? It doesn’t look like the Filipino star wants to end his career with that fight though. If Pacquiao really wants the rematch with Mayweather, then he might need to start groveling and asking him nicely for the rematch. Pacquiao needs to call Mayweather up directly if he wants to make the fight happen.

Pacquiao can’t leave it up to Arum. I don’t think Mayweather would respond well to a conversation with Arum. But I think Arum is more interested in Pacquiao fighting Crawford, even if it means less money.

“I can’t think so unless Floyd Mayweather is lying because he and I spoke a couple of weeks ago via text, and he emphatically stated that it was false, that there is no negotiations, that he is not fighting anymore, period,” Stephen A. Smith of ESPN said about there being negotiations taking place between Mayweather and Pacquiao. “As a matter of fact, that’s exactly what he [Mayweather] said. I’m reading from the text here dated October 9th. ‘It’s totally false. I’m not fighting anymore, period.’ So why Manny Pacquiao continues to bloviate to the public about a potential rematch just speaks of desperation, because obviously he just wants to redeem himself. What he doesn’t know is he just hurts his chances to get Floyd to give him that rematch every time he opens his mouth and speaks about that shoulder injury that he obviously had to get operated on from all those shots he was missing in the game. He [Pacquiao] just reeks of disrespect. Floyd is under no obligation to give him a rematch. Floyd has made a bout a billion in the ring. Pacquiao is struggling to try and pay off the IRS and Top Rank to try and walk away with one quarter of the $100 million purse that he earned against Floyd Mayweather. He’s crying out for a rematch against Floyd, but perhaps he needs to stop bringing up the shoulder injury if he wants a legitimate rematch or fight this kid Terence Crawford or Amir Khan. I asked him about Manny Pacquiao, saying they were discussing a rematch, and that was his response. What Leonard Ellerbe said to me, he said to the media, then I spoke to Floyd directly that day and he texted me that day and he said exactly what he said and asked me to relay it to the public, which is why I did it,” Smith said.

So there it is. Mayweather is denying that there are any negotiations going on with Pacquiao. Mayweather isn’t going to come back, he says. That leaves Pacquiao out in the cold with no other options but to take charge of his own negotiations for his next fight by try and get a fight against someone he want rather than who his 83-year-old promoter Arum wants him to fight. Before giving up on Mayweather, Pacquiao needs to call him or better yet meet him in person to try and talk him into fighting him. If that fails, Pacquiao should look to face Amir Khan, because that’s easily his best money option at 147.

If Pacquiao wants to make big money, then he needs to try and fight the winner of the Miguel Cotto vs. Saul “Canelo” Alvarez fight. That would give him the hugest send off to his career. Ending his career against Crawford would be a poor way to end it because he’s never fought on PPV before and he’s only popular with the hardcore boxing fans and the fans in Omaha, Nebraska.

Pacquiao’s choices are as follows:

1. Meet with Mayweather to try and talk him into fighting a rematch.
2. Face the winner of the Cotto-Canelo fight for a huge retirement payday.
3. Ignore Arum and fight Amir Khan in what would be a good money fight.
4. Try and talk Juan Manuel Marquez in fighting him again.
5. Fight Danny Garcia.
6. Give in to Arum and fight Terence Crawford in the small money fight