NEW YORK CITY (Oct. 15, 2015) – K2 Promotions and Golden Boy Promotions today hosted the final press conference for the Golovkin vs. Lemieux undercard prior to Saturday’s stellar sold-out night of boxing set for the Mecca of Boxing, Madison Square Garden and produced and distributed live on HBO Pay-Per-View on October 17.

Roberto Duran, Panamanian former world champion in four weight classes, and one of the greatest boxers of all time, also stopped by the undercard press conference. He reflected briefly on his storied career and named Madison Square Garden as the home of his most memorable fights. Duran also spoke about his excitement for the fantastic bouts schedule for the Golovkin vs. Lemieux undercard on Saturday, October 17.

Below is what the fighters and their promoters had to say:

“I’m ready for this fight and will give my best. I don’t like to speak much, but I will say I had a great camp and feel strong and in good condition to win Saturday’s fight. I’m thankful and feel blessed that I am able to fight, and I am ready to give the fans a good fight.”

“I live, breathe and eat boxing. I try to keep in shape so I can fight as much as possible. I have prepared myself very well for this fight. I am doing a disservice if I don’t give it my best on Saturday. Fighting a guy like Gonzalez, the number one pound-four-pound fighter in the sport, is a big challenge. He is as big as it gets for me, in my career. He is the biggest challenge I’ve faced to date. I’m going to show you the best Brian Viloria you’ve ever seen. I’m prepared to take the title from Roman.”

“We just got word from Madison Square Garden this morning that every ticket is sold out at the box office for this fantastic night of boxing on October 17. With four fights on the HBO Pay-Per-View telecast including three undercard fights, you have a fantastic broadcast worth the cost.

“This undercard has great international flavor, for fighters from Kazakhstan, Canada, Cuba, Nicaragua, Bahamas, Ireland, Argentina and other places to come to New York and sell out Madison Square Garden without a local favorite. These quality matchups that include the undercard are the reason fans responded. 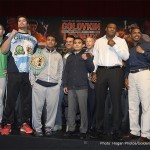 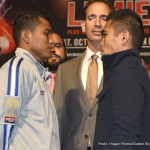 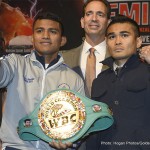 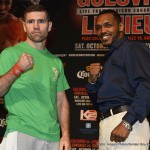 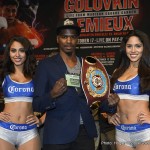 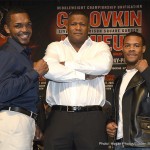 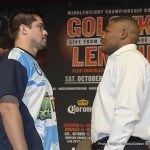 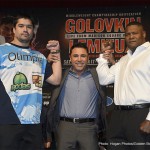 “These undercard fights are going to be explosive on Saturday. These guys have the experience, pedigree, and amateur background to put on great fights for the fans. These fighters have a lot at stake and are hungry for victory.”

“I’m a man of very few words; I just know how to fight. In the ring, I’m totally different from how I am in front of a microphone.”

“It feels great to be here. I’ve had so many obstacles in my life before getting to this point. I love boxing and it is this love that has kept me in this sport. I’m close to getting my degree in medicine; that is what I do when I am not boxing.

“When I was first notified about this fight, I was ecstatic, to be able to be here and fight for Oscar De La Hoya, that is a dream because I look up to him. It’s a dream to be here in this city. I don’t want to make up from this dream.”

“This is a great opportunity for me to show the talent that I have. On Saturday, I will put on a spectacular show. If you don’t know me now, you will definitely know my name after Saturday. This fight goes beyond Eamonn O’Kane, I want to fight guys like Gennady Golovkin and David Lemieux and that is what I will do after I defeat O’Kane.”

“Wow, it’s a dream to be at the mecca of boxing Madison Square Garden to showcase my talent. I look forward to delivering on October 17.”

“This is by far the hottest undercard I’ve fought on since making my professional debut. I can’t wait for October 17.”

“While Saturday’s main event is a contest for super stardom, the undercard sets the stage for fighters seeking to capture a piece of their own stardom. Three fights Saturday night are as high in quality as they are in stakes. The winner of Johnson-O’Kane could become a major player in the same division as the winner of Golovkin-Lemieux. The winner of Ortiz-Vidondo will soon hope to challenge Wladimir Klitschkofor the heavyweight crown. From the main event to the undercard, these are all fighters that love to give fans their money’s worth in the ring.”

“I believe that working together works and I am very proud to see K2 and Golden Boy Promotions to work together to bring the fans what they want to see which is the best fights possible, and that is what we have with this fantastic card on October 17 at Madison Square Garden.”

Golovkin vs. Lemieux is presented by K2 Promotions and Golden Boy Promotions in association with GGG Promotions and Eye of the Tiger Management and is sponsored by Corona Extra, BI Group and Tsesnabank. The event will take place Saturday, October 17 from Madison Square Garden and will be produced and distributed live by HBO Pay-Per-View beginning at 9:00 p.m. ET/6:00 p.m. PT. Doors will open at 7:00 p.m. ET and the first fight begins at 7:05 p.m. ET.