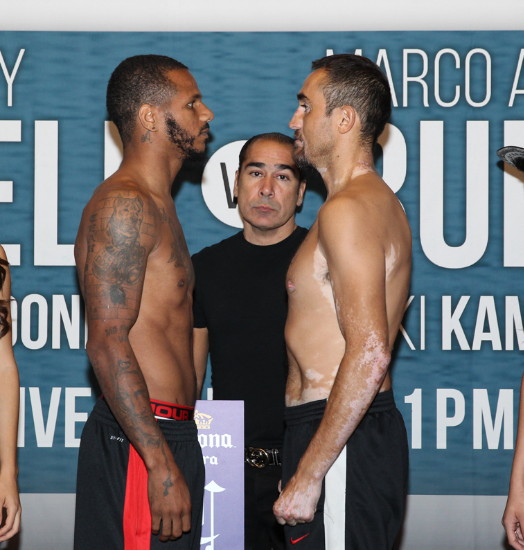 The Dirrell-Rubio fight is one of the more interesting super middleweight clashes in 2016, and the winner of the fight will find himself sitting pretty for an eventual world title shot. It’s likely that the Dirrell vs. Rubio fight will attract most of the interest though and badly upstage the co-feature between WBA World bantamweight champion Jamie McDonnell and Tomoki “El Mexicanito” Kameda, because it’s such an intriguing match-up.

Dirrell, 30, is coming off of a 12 round decision loss to Badou Jack last April in a fight in which Dirrell lost his WBC 168lb title. Rubio is coming off of a crushing 2nd round knockout loss to IBO/WBA middleweight champion Gennady “GGG” Golovkin last October 2014. For that reason, the Dirrell-Rubio fight is very important for both fighters. Neither guy can afford to lose if he wants to keep his career afloat.

Dirrell, #5 WBC, is ranked high enough to where he could soon be in position to try and recapture the WBC title once the smoke clears from the Badou Jack vs. George Groves fight next Saturday night on September 12th at the MGM Grand in Las Vegas, Nevada. Dirrell would match up better against a fighter like Groves, because he’s shown to have a fragile chin in some of his fights.

Dirrell’s single pot shots, which are very powerful, would be difficult for Groves to take without him following his old pattern of dropping to the canvas for the 10 count. Fighting Badou Jack again would be a much more difficult equation for Dirrell, because it would mean that he would need to increase his work rate considerably and learn to throw combinations for him to beat him.

Dirrell will never be a mobile fighter like his talented brother Andre Dirrell, so the best he can do is learn to throw more punches so that he doesn’t get outworked again by Jack. But someone like Groves would be perfect for Dirrell, because he would likely score a quick knockout over him once he bounces one of his big right hands off his chin.

Having seen McDonnell make weight in the past, this is the first time I’ve seen him look this bad. I honestly think McDonnell needs to move up to super bantamweight already, because he clearly no longer belongs at bantamweight. He’s now too big for the weight class, and I think he’s going to lose his title on Sunday due to him having taken off too much weight.

In contrast, Kameda looked great in coming in at 117.8lbs, and looking like he could step inside the ring and fight immediately. Kameda looked like he had zero problems making weight, and he likely won’t rehydrate that much by tomorrow afternoon.

It might be a good thing for McDonnell to lose his title, because then he can move up to 122 and chase fighters like WBA World super bantamweight champion, who McDonnell has already expressed interest in fighting.