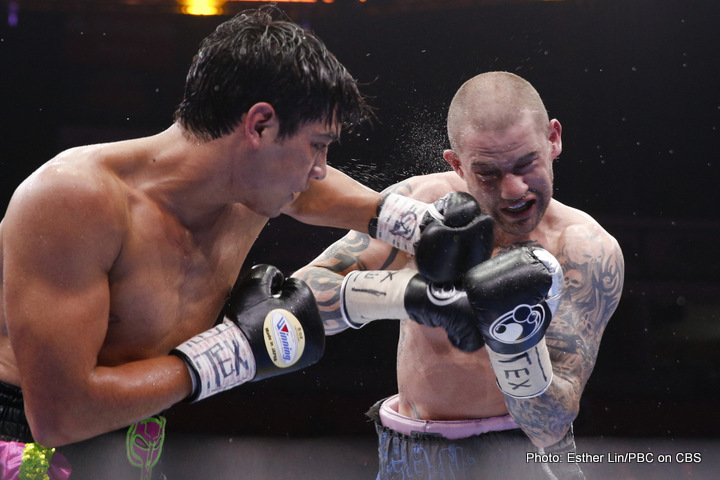 By Scott Gilfoid: Former two division world champion Ricky Burns (38-5-1, 12 KOs) will be facing European Boxing Union lightweight champion Edis Tatli (25-1, 8 KOs) for his EBU strap on October 24th on the undercard of the Kell Brook vs. Diego Chaves card at the Sheffield Arena in Sheffield, UK. The card will be televised on Sky Box Office along with Wladimir Klitschko vs. Tyson Fury.

Another fight that has been added to the Brook-Rios card is EBU super bantamweight champion Gavin McDonnell (13-0-2, 4 KOs) defending his title against 28-year-old Jeremy Parodi (37-2-1, 9 KOs).

Adding Burns-Tatli and McDonnell-Parodi fights to the Brook vs. Chaves card helps beef it up in a significant manner. Before these two fights were added to the card, the undercard was looking really poor with only Steven Hale, David Allen and Arif Shafiq on the card in separate fights against TBA opponents. But at least there are a couple of decent but far from great fights.

Burns, 32, has lost 3 out of his last 5 fights since 2014. Burns has probably really lost 4 out of his last 7 fights, because the 12 round draw he was given in his fight against Raymundo Beltran in September 2013 was arguably a gift draw in the minds of a lot of boxing fans of the sport. The Burns-Beltran fight took place in Burns’ hometown of Glasgow, Scotland.

It’s obviously a huge step backwards for Burns to be fighting for the EBU title against the 28-year-old Tatli rather than taking on a world champion, but it’s impossible for Burns to be fighting for a world title at this point because he’s no longer even ranked in the top 15 at lightweight due to the mess of losses he’s accumulated in the last year.

Burns is starting from the bottom, and he’s going to need to prove that he can beat the fringe contender #14 IBF Tatli to at least get a bottom of the division ranking at lightweight. Burns obviously has a long, long ways to go for him to get another title shot. If he loses to Tatli, then he might as well hang up the gloves because the chances of him ever climbing his way back to another world title would be all but impossible.

Burns’ career has been on the slide since he was battered by Beltran in 2013. Burns suffered a broken jaw in that fight, which required for him to stay out of the ring for a number of months until returning to defend his WBO lightweight title against Terence Crawford in March of 2014. Burns took a beating in that fight in losing a 12 round decision. In hindsight, Burns probably should have vacated his WBO title, and spent more time healing from the jaw injury. Burns looked gun shy in the Crawford fight, looking as if he was afraid to get hit with head shots on the jaw.

Burns then lost his Dejan Zlaticanin in June of 2014. Burns finally got a win in beating someone named Alexandre Lepelley by an 8 round decision last year in October. However, Burns then lost his next fight against Omar Figueroa in May of this year in losing a 12 round decision in Hidalgo, Texas. It was a winnable fight for Burns, but he ruined his chances by holding too much. Burns lost a point for holding in the 8th and 11th rounds. Of course, if Burns hadn’t held Figueroa so much, he likely would have wound up getting knocked out by him, so it’s sort of understandable why he resorted to holding him all night long rather than fighting.

Gavin McDonnell recently picked up the EBU super bantamweight title with a 12 round decision win over Oleksandr Yegorov last March in Sheffield. It was a one-sided contest from start to finish, which wasn’t surprising because McDonnell wasn’t facing a very good fighter.

« Tim Bradley vs. Brandon Rios fight could be without WBO title on line