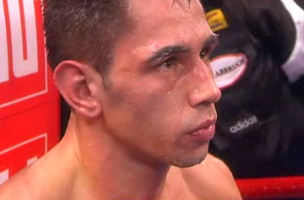 Chudinov, 27, has to get past his first title defense against #4 WBA Frank Buglioni (17-1-1, 13 KOs) on September 26th at the Wembley Arena in London, UK. If Chudinov wins that fight, he’ll be facing Sturm in a rematch in December. Chudinov defeated Sturm by a 12 round split decision last May in a very close fight in Frankfurt, Germany.

In the meantime, WBA interim super middleweight champion Vincent Feigenbutz (20-1, 19 KOs) isn’t too happy at learning the news of the Chudinov-Sturm rematch, because he had been hoping to be the one that fights Chudinov in December. With the World Boxing Association now letting Sturm get a second bite out of the apple, the soon to be 20-year-old Feigenbutz is now left waiting for his eventual shot at the WBA title. Feigenbutz now wants to fight #3 WBA Sturm before December. If Sturm is going to be fighting Chudinov a second time, then Feigenbutz wants a crack at Sturm before then.

“Adnan [Sturm] take the challenge of fighting me,” Feigenbutz said on his Facebook page.

While it is a buzz-kill that the WBA will be letting Sturm fight Chudinov a second time provided that he gets past Buglioni on September 26th, I don’t think Feigenbutz has a ghost of a chance of getting a fight against Sturm before December. That’s a pipe dream on Feigenbutz’s part. I mean, there’s no reason for Sturm to fight a slugger like Feigenbutz.

Sturm likely wants the WBA strap because it will make a fight between him and WBO super middleweight champion Arthur Abraham a bigger fight, because the WBA strap will legitimize Sturm more than it would be if he were to go into a fight against Abraham off of a loss to Chudinov and no title. The German boxing fans will eat up a unification fight between Sturm and Abraham if Sturm has the WBA strap in his possession. I don’t think they’ll care a bit that Sturm would be seen by many fans outside of Germany as little more than a paper champion, and not the real thing. Sturm having the WBA title will make a fight between him and Abraham more meaningful for some fans in Germany.

As for Feigenbutz, he’s pretty much in the same boat at Gennady Golovkin was when he was attempting to get a fight against Sturm in 2010. The WBA messed up Golovkin’s hopes when they elevated Sturm to the WBA Super World middleweight champion in September 2010, which erased any chances that Golovkin had in getting a fight against Sturm. There’s no way on earth that Sturm is going to voluntarily agree to fight the hard hitting 19-year-old Feigenbutz on his own accord. Heck, even if the WBA ordered Sturm to fight Feigenbutz, I couldn’t see Sturm taking that fight. If the WBA made that move, I think Sturm would just say forget it and just move straight into a title shot against Abraham without even bothering at trying to add the WBA strap to his collection.

In some ways you’ve got to give Sturm credit for at least trying to win the WBA title by fighting the hard hitting Chudinov a second time. It’s a risky move on Sturm’s part, because if he loses for a second time to Chudinov, it’s going to jeopardize his title shot against Abraham. But it’s a risk that could pay off for Sturm if he beats Chudinov, because he’ll be able to take his WBA strap into a fight against Abraham, and likely make more good cash from the fight because of that. I mean, Sturm will have things his way in a rematch against Chudinov because the fight will likely be in Germany again, and Sturm is very, very hard to beat in Germany. But Sturm is going to fight Abraham regardless.

I know the World Boxing Organization might not sanction the fight, but believe me, Sturm and Abraham will be fighting each other, and I don’t see the WBO being able to do anything at all to stop that fight from taking place. There’s too much money in the fight for it not to take place. It would be better for the WBO to give Sturm a top 15 ranking regardless of what happens in his rematch with Chudinov. At least by doing that, the WBO will be able to get some nice sanctioning fee money from a Abraham-Sturm fight.

« Abner Mares: I thought I won the fight, I’m willing to do a rematch

Santa Cruz defeats Mares: A Win is a Win »