Johann Duhaupas will be competitive against Deontay Wilder 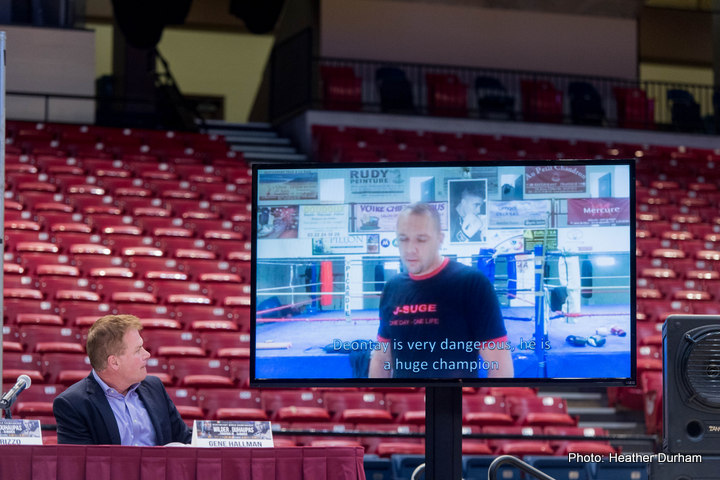 By Scott Gilfoid: A lot of boxing fans and members of the media are writing off the chances of the 6’5” Johann Duhaupas (32-2, 20 KOs) for his title shot against the talented WBC heavyweight champion Deontay Wilder (34-0, 33 KOs) on September 26th. They don’t see the 32-year-old Duhaupas as having the talent to compete with the 6’7” Wilder.

I can understand why they wouldn’t see Duhaupas as being good enough to compete with Wilder, because not too many heavyweights can due to his incredible punching power, but I think Duhaupas has the talent to possibly go the distance with Wilder.

Al Haymon, the adviser for Deontay, did a good job of picking out France’s Duhaupas as his opponent because this guy has loads of talent and he’ll make it interesting for the fans that are watching the fight on Premier Boxing Champions on NBC on September 26th.

“Deontay Wilder faces a powder puff himself when he makes his second title defense vs. unknown Frenchman Johann Duhaupas,” said Ron Borges from the bostonherald.com. “About the best thing you can say about this fight is it’s free so it will draw an audience. If Wilder (34-0, 33 KOs) does as expected, which is quickly turn Duhaupas (32-2, 20 KOs) into a French pastry.”

See what I mean when I say Duhaupas is being overlooked by the media. It’s so bad that the media and the fans are overlooking Duhaupas and questioning his talent, because I believe he’s got the game to make this a very, very interesting fight.

If you sat down and watched Duhaupas’s fights against Erkan Teper and Manuel Charr, you’ll know that Duhaupas is a very live heavyweight with the ability to do a lot of the things in the ring to give Wilder some problems in this fight. I mean, Erkan Teper is one of the best heavyweights on the planet right now, and Duhaupas made a monkey out of him in many of the rounds of the fight. I became a huge fan of Duhaupas after seeing those two fights. He showed in those fights that he’s a very technical fighter with the kind of skill set that would give any heavyweight in the division a great deal of problems, even someone like Wladimir Klitschko.

Duhaupas’s No.12 ranking by the World Boxing Council is not an accurate ranking for the type of fighter that he is. Duhaupas is far better than a fighter with a low ranking like No.12. I rate him above Vyacheslav Glazkov, Bermane Stiverne, Bryant Jennings, Lucas Browne, Artur Szpilka, Andy Ruiz, Carlos Takam and Tony Thompson. Those guys are all ranked above him in the WBC’s rankings. I would give Duhaupas a very good chance of beating Povetkin due to his huge size advantage over him.

Duhaupas had Teper looking really bad in that fight. It was only because of Teper’s huge punching power that he was able to win a 12 round decision. But Duhaupas was never bothered by Teper’s punching power in the least, as he took the shots and did a good job of landing counter shots to make the fight interesting.

Duhaupas’ movement and his jab were both excellent in the Teper and Charr fights. He had both fighters unable to land their big power shots, and it was very interesting to watch. These were two of the better opponents that Duhaupas has faced during his career, and he showed in both fights that he had more than enough talent to hang with them and in many cases get the better of them with his nice shots from the outside.

This will be his second fight in Birmingham since that victory and it’s the right place for this kind of “opponent” — away from too much public scrutiny,” Borges said.

No, I don’t agree with that at all. Duhaupas will be a good test for Deontay and will help build his skill level up for him to beat Alexander Povetkin in early 2016, and then possibly IBF/IBO/WBA/WBO heavyweight champion Wladimir Klitschko later in the year in 2016.

The Wilder vs. Duhaupas fight will be taking place at the Legacy Arena,in Birmingham, Alabama. This will be Deontay’s second consecutive fight in Birmingham. He defeated Eric Molina by a 9th round knockout last June in that city in front of a huge crowd. The fact that Deontay can attract huge audiences in Birmingham is likely the reason why he’s going back there for this fight.

Lemieux: Golovkin will be surprised by my power »