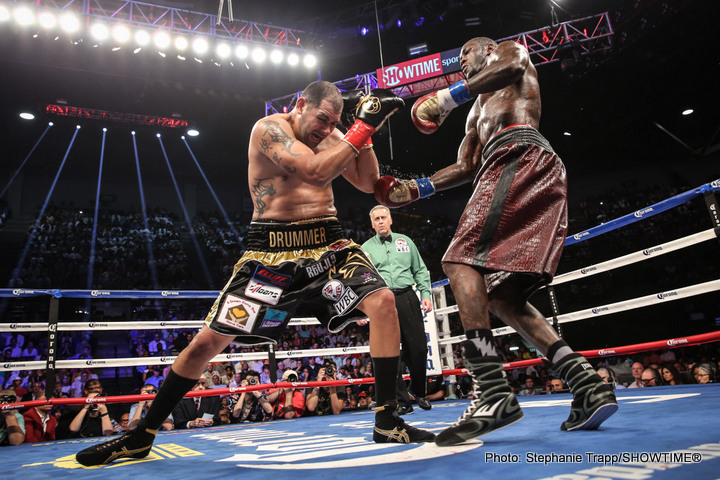 By Scott Gilfoid: WBC heavyweight champion Deontay Wilder’s September 26th fight against #12 WBC Johann Duhaupas (32-2, 20 KOs) will be announced tomorrow on Thursday, according to Dan Rafael. The Wilder- Johann Duhaupas will be televised on Premier Boxing Champions on NBC from the Legacy Arena in Birmingham, Alabama.

While some boxing fans are somewhat upset about the 6’7” Wilder’s choice of opponent other fans are pleased and see Duhaupas as a good choice for Wilder to stay busy. I personally think it’s a good opponent for Wilder, because the 6’5” Duhaupas has a lot of talent and can help Wilder sharpen up his claws to get him ready for his important fight against Alexander Povetkin next year.

Duhaupas is taller, younger, and moves far better than Povetkin. There’s no comparison between the two in terms of mobility, jabbing and overall boxing skills. I rate Duhaupas as well above Povetkin in the skills department.

“Wilder’s Sept 26 defense on NBC will be announced tomorrow. He’s fighting Johann Duhaupas of France in Birmingham, per source,” Rafael said on his Twitter.

This is Wilders’ chance to shine in front of a lot of people before his bigger fight against Povetkin. Duhaupas will make it interesting because he’s got a lot of different tools in his toolbox. He can jab, slow, move and fight on the inside. In a lot of ways, Duhaupas is better skilled than Wilder and a lot of other heavyweights in the division.

The only thing that’s missing from Duhaupas’s game is power. He’s got a great chin, as he showed in his 12 round decision loss to Erkan Teper. Duhaupas took Teper’s best shots and fired back at all times and made the fight a very difficult one for the Germany fighter.

Duhaupas looked really good in his last fight in beating former world title challenger Manuel Charr by a 10 round decision in Germany. The fight was scored closely, but it was very one-sided with Duhaupas appearing to win 9 of 10 rounds in my view.

Last Friday night’s cruiserweight contest between WBO champion Marco Huck and unbeaten challenger Krzysztof Glowacki peaked at 874,000 viewers on Premier Boxing Champions on Spike TV, according to Dan Rafael. The Huck-Glowacki fight, which was the co-feature bout on the Antonio Tarver vs. Steve Cunningham card, outdid the Tarver-Cunningham in the ratings department. The Tarver vs. Cunningham fight averaged 705,000 viewers.

The fact that the Huck vs. Glowacki fight was able to outdo the main event between the much better known Tarver vs. Cunningham fight suggests that the boxing fans were taking to social media to report on how interesting the Huck-Glowacki fight was.

It’s really not surprising that the Huck-Glowacki fight brought in better numbers because the Tarver-Cunningham fight was a bad match-up from the moment the fight contracts were signed by the fighters, because it pitted two small cruiserweights against each other, and neither of them is considered to be in the same class as guys like Wladimir Klitschko. They’re just a couple of aging heavyweights without much punching power.

Danny Garcia vs. Robert “The Ghost” Guerrero possible for the fall »