Deontay Wilder vs. Johann Duhaupas to be announced soon for September 26th 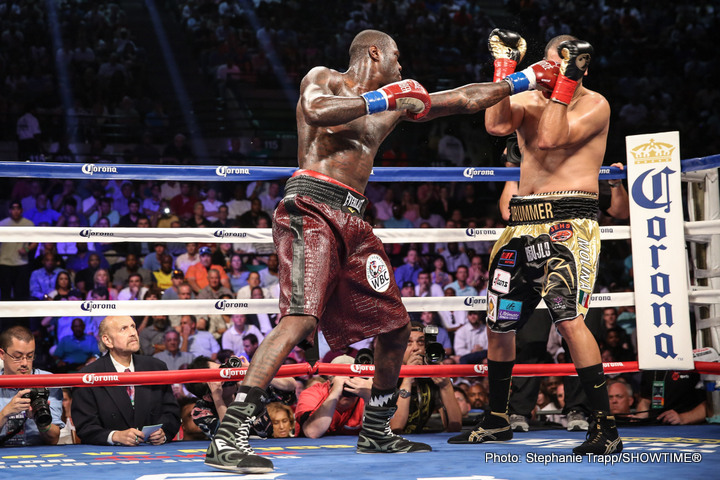 By Scott Gilfoid: As I previously announced earlier, WBC heavyweight champion Deontay Wilder’s next fight against the highly skilled #12 WBC Johann Duhaupas (32-2, 20 KOs) is expected to be announced any day now, and it might be before the end of this week.

Wilder and the 6’5” Duhaupas will be fighting on September 26th on Premier Boxing Champions on NBC from the Legacy Arena in Birmingham, Alabama. Wilder needed to face someone for a voluntary defense to get him ready for his title against Alexander Povetkin in the first half of 2016, but I was very surprised at the pick that Wilder and his adviser Al Haymon selected for his next fight.

Duhaupas, 32, is a very talented fighter with superb boxing skills. I rate Duhaupas as the best big man in the top 15 in terms of his skillset. I mean, Duhaupas obviously doesn’t have huge punching power, which is the area that has kind of held him back from being a great fighter, but I think he’s got the best skills of the guys. I only rate Duhaupas behind IBF/IBO/WBA/WBO heavyweight champion Wladimir Klitschko with his skills.

Duhaupas has a couple of losses on his resume to Erkan Teper and Francesco Pianeta, but those were close defeats and there’s no shame in him losing those fights. Duhaupas has improved to the point where he would beat Pianeta now, and I think he would give Teper a big run for his money again.

Wilder needs someone to give him some competitive rounds, and Duhaupas is the guy to do that. Wilder’s last opponent Eric Molina didn’t consistently press the action against Wilder enough to give him anything from the fight. Deontay needs a talented opponent like Duhaupas to get him ready for the Povetkin fight, because the Russian fighter is going to be on the attack the moment the bell runs in the 1st round.

Wilder has big things in front of him in 2016 starting with his fight against Povetkin. Once he gets that fight out of the way, Wilder will be looking to face Wladimir Klitschko in a unification fight, provided that he beats Tyson Fury in their fight on October 24th in Dusseldorf, Germany.

I think Wladimir will destroy Fury to put him in position to face Deontay later in the years. That’ll be a big fight that will make Wilder a ton of money. If Wilder can get past Wladimir in 2016, then the skies the limit in terms of his popularity goes in the United States and worldwide. Deontay has the kind of talent and charisma to be a huge worldwide star in a way that we haven’t seen from Wladimir.

« Lemieux: Golovkin has a serious opponent in front of him