LOS ANGELES – (Aug. 28, 2015) – Two-time welterweight world champion Andre Berto (30-3, 23 KOs) participated in a media workout at the J.W. Marriott at L.A. Live as he prepares for the biggest fight of his career. In front of an enthusiastic crowd, Berto looked focused and in great shape, jumping rope and shadowboxing, as he looks to become the first fighter to defeat 12-time world champion Floyd “Money” Mayweather (48-0, 26 KOs), on Saturday, Sept. 12 at the MGM Grand Garden Arena in Las Vegas live on SHOWTIME PPV® (8 p.m. ET/5 p.m. PT).

In addition to Berto, top 168-pound contender George Groves and former three-time world champion Jhonny Gonzalez participated in the media workout as they prepare for their respective fights on the SHOWTIME PPV broadcast.

Promoted by Mayweather Promotions, the Sept. 12 four-fight pay-per-view telecast will be produced and distributed live by SHOWTIME PPV and is the sixth and final fight of a record-breaking deal between Mayweather and Showtime Networks Inc. SHOWTIME Sports® will support the event with the Sports Emmy® Award-winning series ALL ACCESS.

“From an energy aspect I feel great. It’s my first time in a while coming into a fight with no injuries. This is the healthiest I’ve been since I can remember.

“At the end of the day, this fight was supposed to happen two or three times. Situations with me not taking care of myself and not taking opponents seriously caused it to happen. But styles make fights and we’ll see what the boxing fans say Sept. 12.

“I know that I’m still the same guy who people thought could have given Floyd problems a couple years ago.

“Victor Ortiz and Robert Guerrero both got fights with Floyd because they beat me. There must be something to that. They said ‘if he did something to Berto, he should get a shot at Floyd.'” 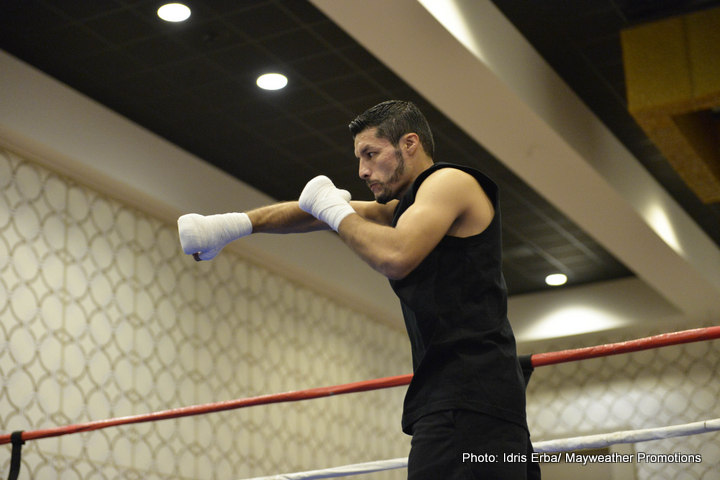 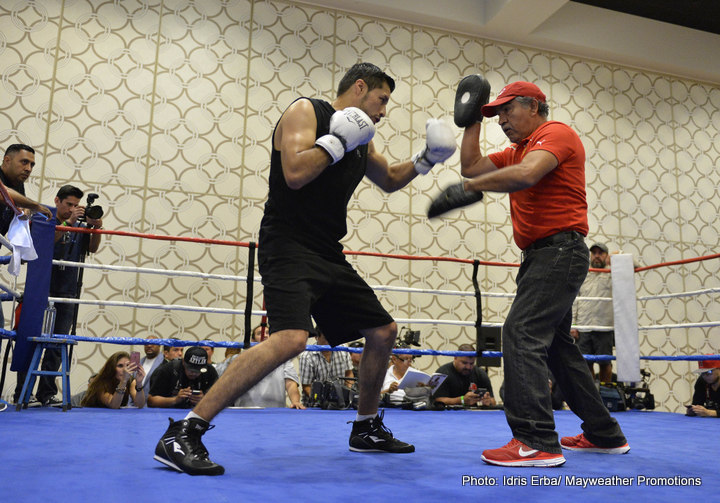 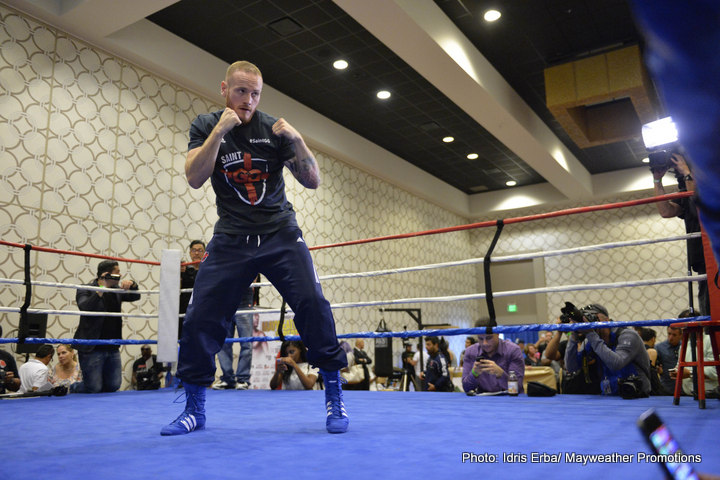 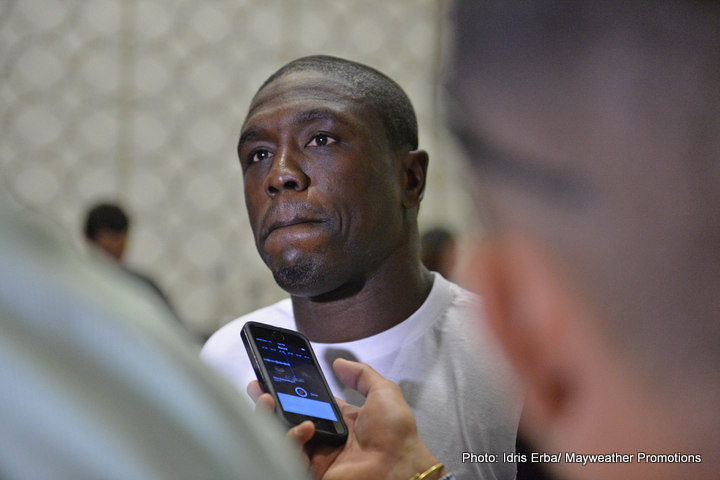 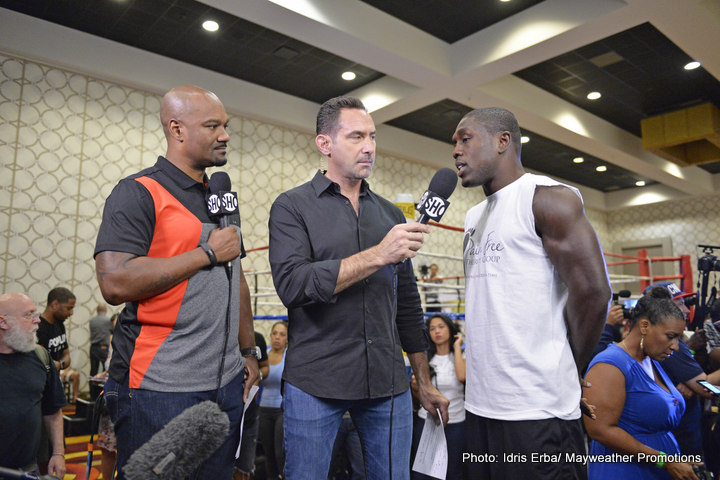 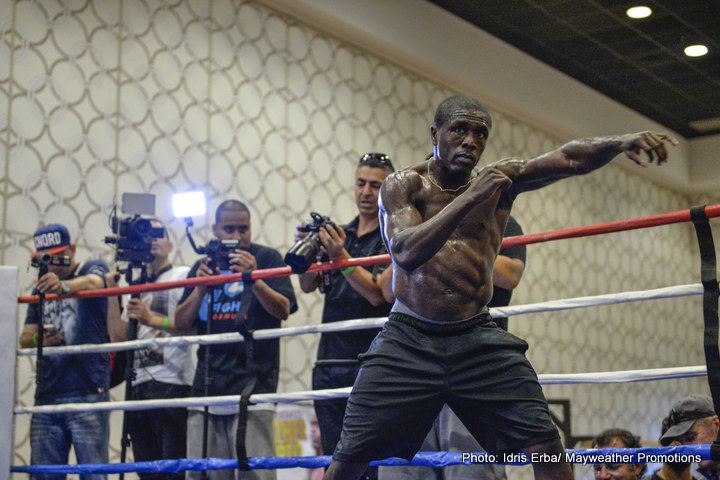 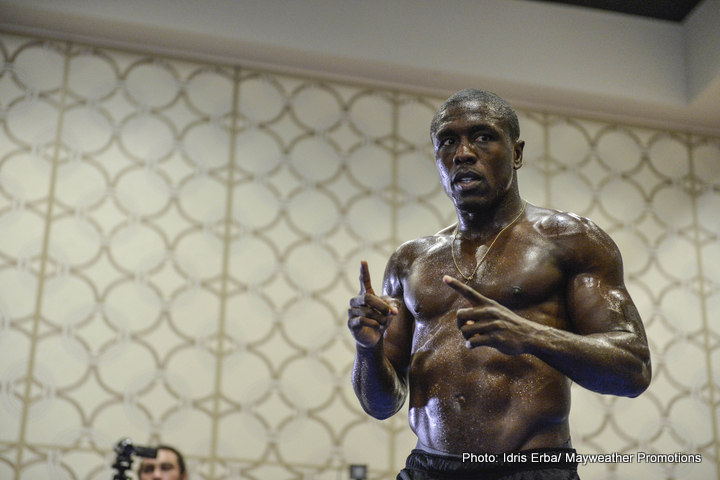 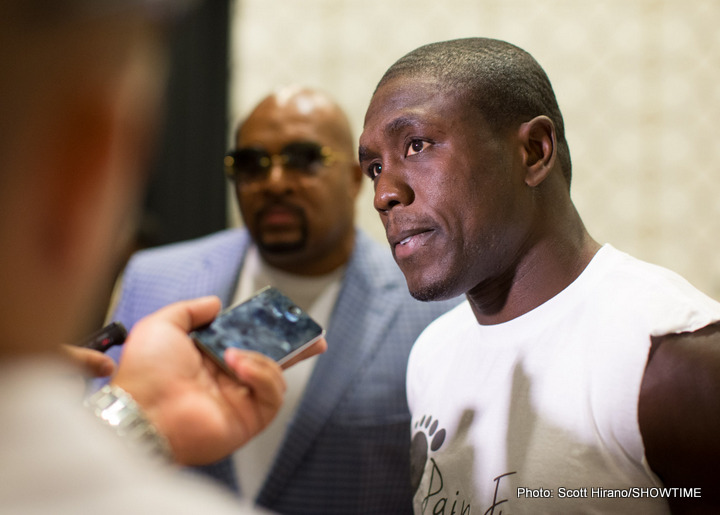 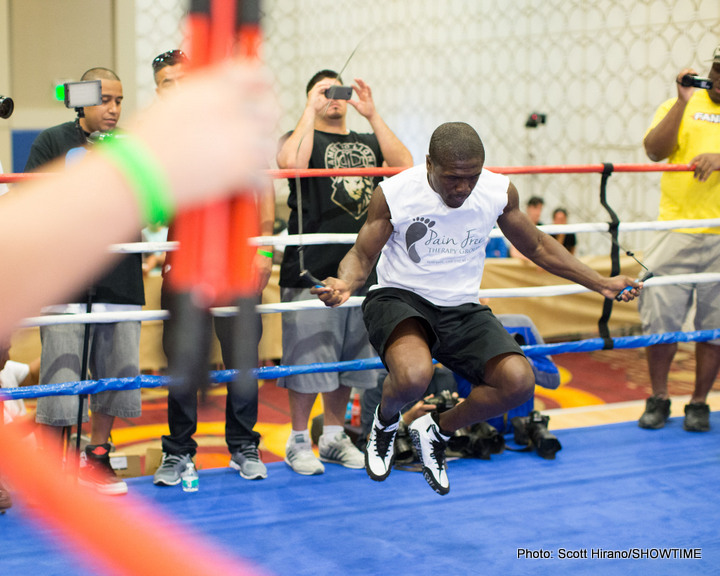 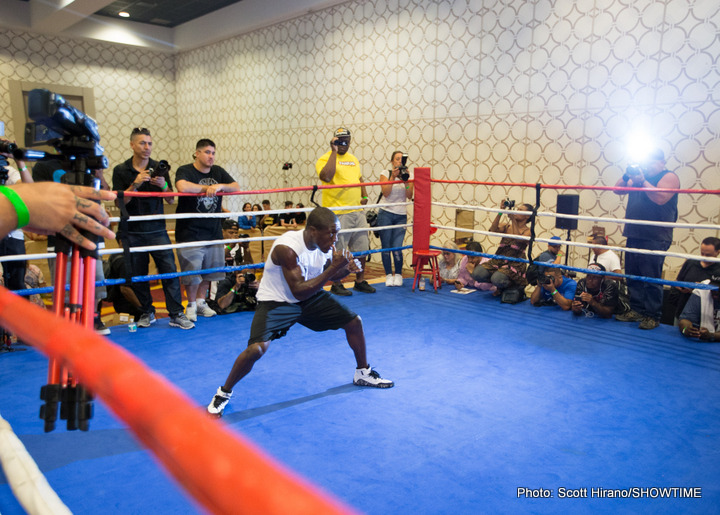 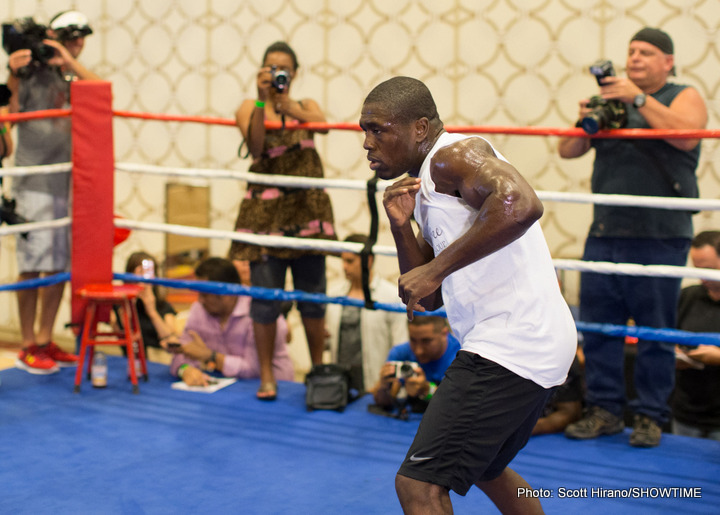 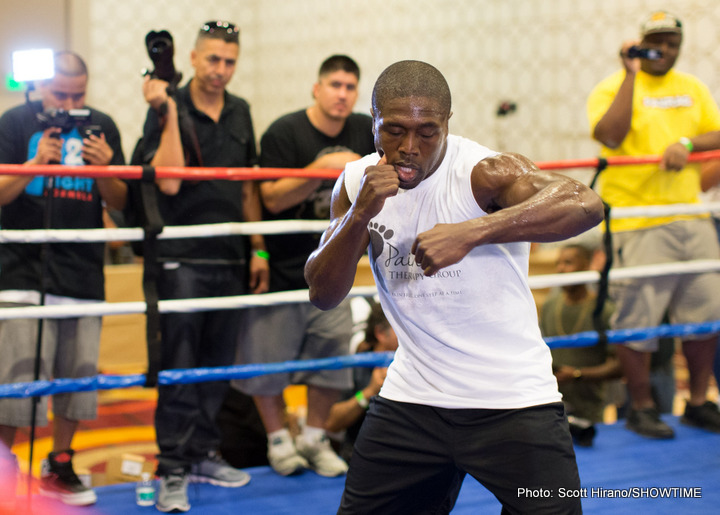 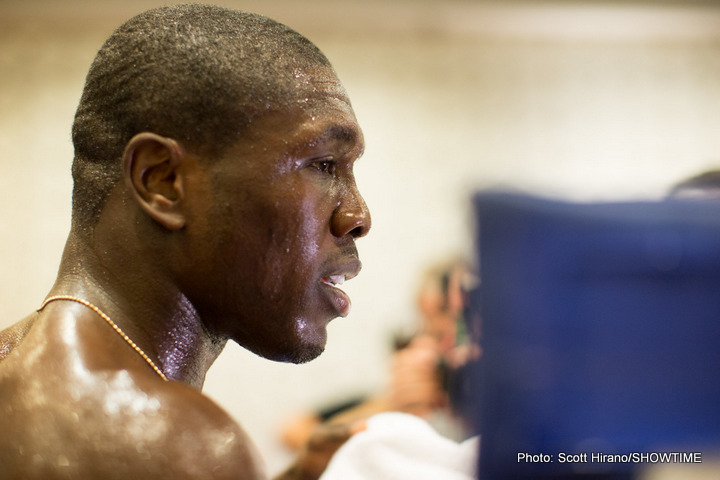 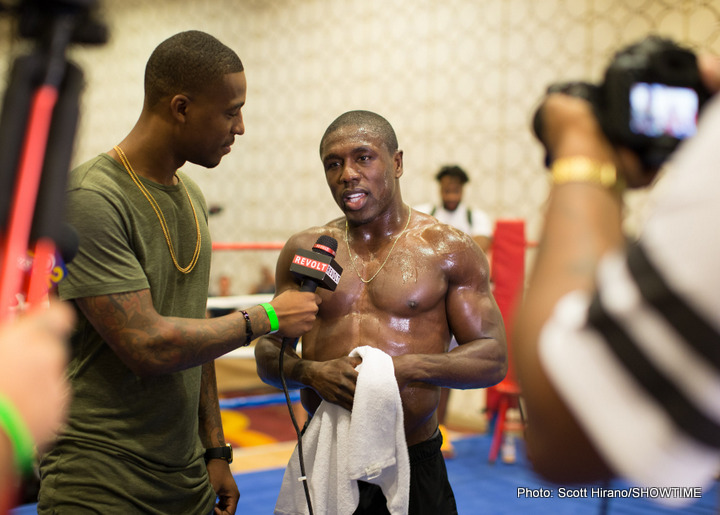 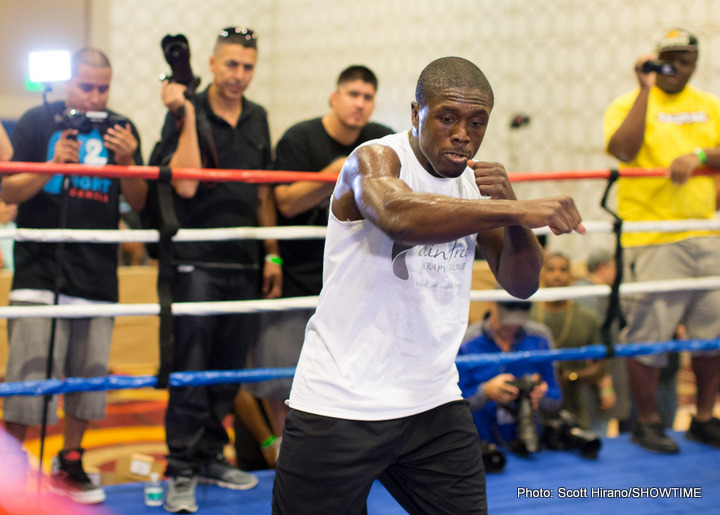 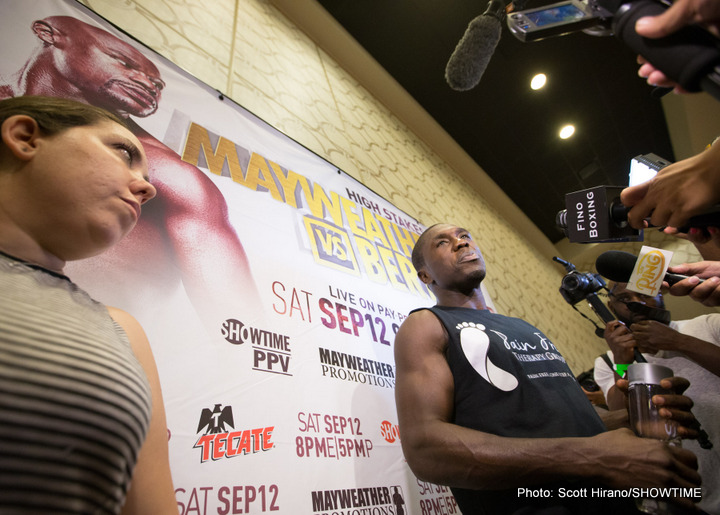 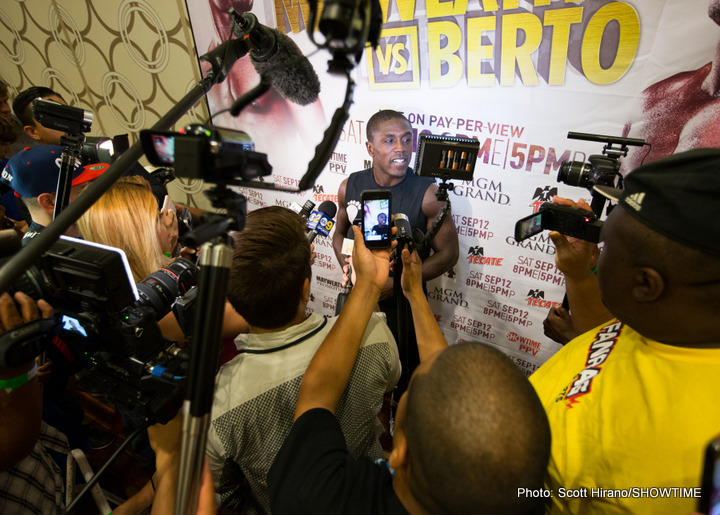 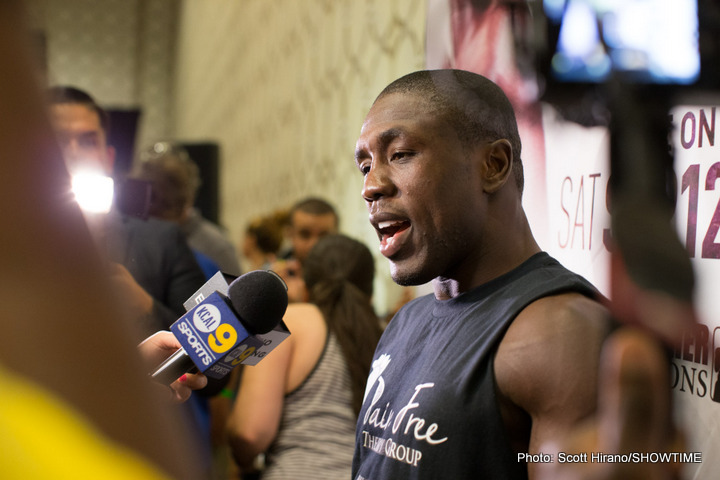 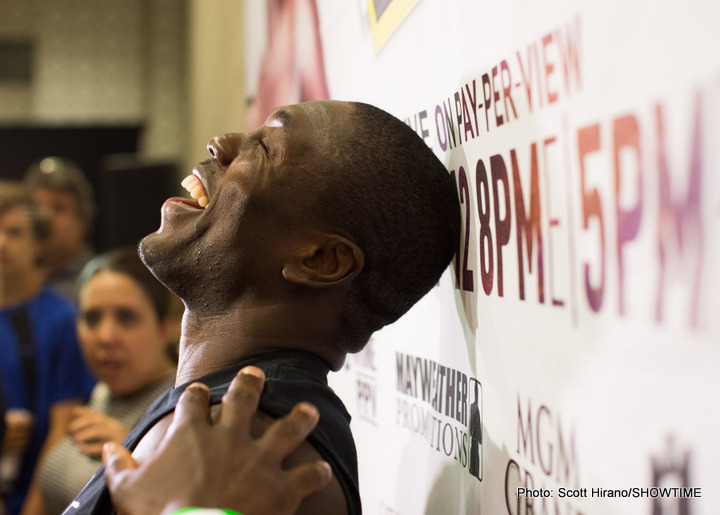 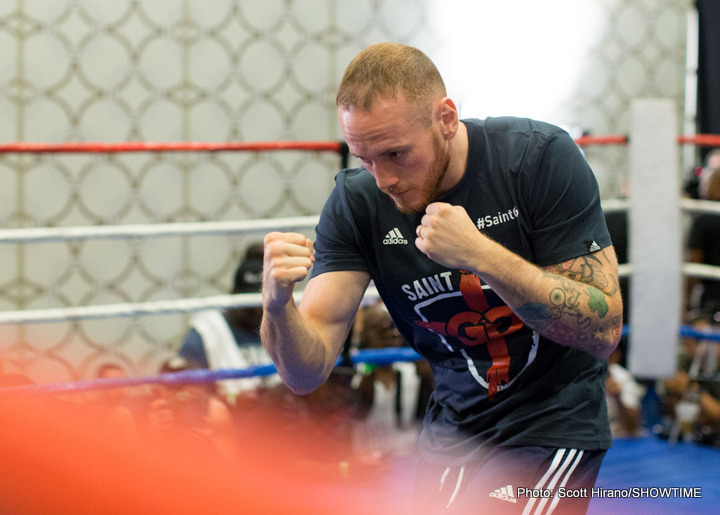 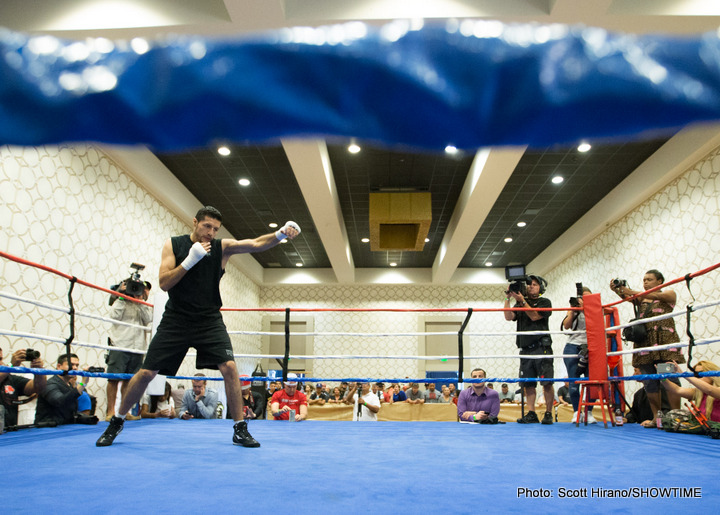 “We’re here. It’s my time to see him. He can have his ‘MayVinci’ code because we put in the work. The whole team is confident. I’m going to do what I do.

“We worked on a lot of different things at camp. I have the speed to keep up with him. I have more power.

“The thing with Floyd is, most guys he fights aren’t as athletic as he is. But I am.

“If you come at Floyd fast but don’t have a plan and don’t have good footwork, it’s too easy for him. If you have a guy that’s as athletic as him, it gives him problems.

“There is a lot more to me than just walking guys down. I have speed, I have power, I have a crazy uppercut, I can move to the side. There are a lot of ways I can get it done.

“I’m not going to watch his sparring. I don’t want to watch him driving his cars, none of that. I want to see him Sept. 12.

“This is my first time going into a fight without all the pressure on my back. I’ve always been the favorite in every fight. I don’t know what he’s feeling and I don’t really have to care about it.

“It’s a different mindset. Coming from where I come from, we always had to defeat the odds. We didn’t have what other people had. We had to work twice as hard for everything. To be noticed to be seen. Even back then it drove me to be the best that I can be. I wanted everyone to know I was somebody you had to watch.

“I’ve faced these odds my whole life. I was discounted two years ago when I was laying in the hospital. I’m constantly envisioning victory.

“All the hard work we’re putting in, it’ll all pay off fight night. It’s not just for me. I’ve been through doing things for me. I see what’s real now.

“I’ve prepared myself mentally to be in this position. People can say whatever they want. We’re focused.

“This is going to be for everyone who believes in the underdog.”

“We have a unique opportunity right in front of us. We have a chance at history and to cement a legacy for my fighter (Berto).

“What is the key to winning this fight? (Berto) has got to want to win. He has to want it more. He holds the keys in his hand. You can plan as much as you want for tomorrow, but we don’t know what tomorrow will bring. We can only prepare.

“If (Berto) wins this fight, you’ll see me jumping up and down and it will be hard to compose myself. I’m usually pretty composed, but you might see me jump up and fall out of the ring and hit my head or something.

“No matter what happens, Floyd will always be considered one of the best ever. Win or lose, his legacy is cemented.

“There are similarities between Floyd and Andre Ward. They both started boxing as young boys, and were Olympians and are undefeated. There’s a lot of pressure that comes with being undefeated and they both have faced that.

“It’s not fair to the fight game to say this is a free shot and to go in there and say we have nothing to lose. We have everything to lose.”

“Training camp has been going great. We’re fully acclimated to the time change and altitude. We’re performing very well in the gym and fulfilling the plan. I’m ready to rock.

“We’ve trained in the U.S. before. Last year we came over to spar with Gennady Golovkin. This time we’re out there for much longer and it has been very successful.

“I like training in the altitude and I expect it to help me on fight night. We got used to it over the weeks of camp and now it’s time to bring the extra energy to the ring.

“I’m fully immersed in this fight with Badou Jack. Everyone wants to know about the future plans, but I leave that up to the promoters. My main concern is winning that WBC belt.

“I carry power. I have good hands and foot speed. I can control the fight from anywhere. The mistakes that Badou Jack makes, I will take advantage of.

“I want to announce myself as the best fighter in the division and I’m planning on doing that Sept. 12. There won’t be any question marks. After I win this fight, I’ll have proof.

“I’m a valuable commodity in the UK and it’s about time I started building my brand in the states. This is a huge opportunity being on the Mayweather card. The undercard will not be overlooked this night.

“Every fight is more important than the last. It doesn’t matter who you fight, it can affect you in a big way. I have a style that will naturally engage with the fans. People like to see me fight. I look to take the opponent out and that will be the same on Sept. 12.

“Once Badou Jack leaves an opening, I will take it. I plan to look very good doing so.”

“I feel great. I’ve been preparing at the gym a lot and I feel very good about this fight.

“I am ready to win in this division and compete for a world title right away.

“I am fighting so quickly after my last victory because I am very confident. I want to stay active. I want to gain what I had before the loss to [Gary] Russell. I’m moving forward.

“I know that my opponent is a strong fighter. He’s going to throw a lot of punches but I’m going to bring it right back at him hard.

“Being on the Mayweather card is a blessing. I’m excited to be in Las Vegas with the whole world watching.

“I’m honored to be fighting on the Mexican Independence weekend. I’m ready to represent for my Mexican people. I’m going to leave everything in the ring.

“What I want out of this fight, is an opportunity to win a world title. This is why I train so hard, to win world titles and fight in big fights.

“I believe in my power punches. I’m intelligent on the inside and the outside. I believe in myself as a fighter and that is why I’ll win.”

“I think Floyd shocked everyone by sparring on his media day on Wednesday. It wasn’t planned. You just never know what you’re going to get at any Mayweather event. He’s always going to do something to attract attention and put on a show.

“There’s no fear in Virgil (Berto’s trainer) or Andre checking it out and finding something that they can use against Floyd. Virgil is an excellent trainer and they will be prepared for everything for this fight.

“Everything is right on track with the promotion. Doing a media workout like this is very important to keep the publicity up and to market the event and let the fighters interact with the fans. We have a tremendous undercard on Sept. 12

“The SHOWTIME All Access episodes have been excellent and are getting the fans and media excited for this fight.”

“HIGH STAKES: Mayweather vs. Berto,” a 12-round welterweight world championship bout for Mayweather’s WBC and WBA 147-pound titles, is promoted by Mayweather Promotions LLC. The event will take place Saturday, September 12 at MGM Grand in Las Vegas and will be televised by SHOWTIME PPV. The undercard features a WBO Junior Lightweight World Championship fight, which is a rematch between Roman Martinez and Orlando Salido. Also featured on the PPV telecast will be a WBC Super Middleweight title bout between Badou Jack and George Groves, which is promoted in association with Team Sauerland. The opening PPV bout pits former world champion Jhonny Gonzalez against Puerto Rico’s Jonathan Oquendo in a 10-round super featherweight bout.