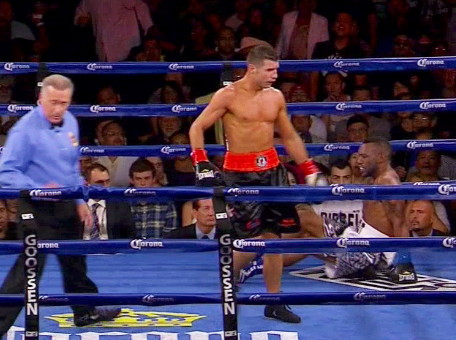 By Dan Ambrose: Former WBA junior middleweight champion Austin “No Doubt” Trout (29-2, 16 KOs) will be back in action on September 6h against the struggling Joey Hernandez (24-3-1, 14 KOs) in a fight on Premier Boxing Champions on CBS. Trout, ranked #4 IBF, #4 WBO, #5 WBA, #6 WBC, is trying to work his way to a world title shot against one of the 154lb champions.

Trout is in a tough situation though because he’s already been beaten by WBA champion Erislandy Lara, and IBF champion Cornelius Bundrage, WBO champ Demetrius Andade and WBA/WBC champion Floyd Mayweather Jr. aren’t going to bother fighting him because he’s not a big money fight, and it would be a fight that could be difficult.

The Trout-Hernandez card will be on the same card as former WBO middleweight champion Peter Quillin in his fight against an opponent still to be determined. There isn’t a venue for the card as of yet, but they’re thinking of staging it at the Barclays Center in Brooklyn, New York.

Trout, 29, is still trying to resurrect his once promising career following back to back defeats at the hands of Saul “Canelo” Alvarez and Erislandy Lara in 2013. Trout was knocked down by both fighters. He gave Canelo a lot of problems in a fight that was much closer than the scores the judges gave. A lot of boxing fans saw the fight as a draw rather than a win for Canelo. However, Trout was soundly beaten by Lara.

There’s no disputing that. Since his loss to Lara, Trout his won his last three fights, besting Daniel Dawson, Luis Grajeda and Luis Galarza. Dawson knocked Trout down twice in the 3rd round of their contest. Trout was able to salvage a victory when he came back to knock Dawson down in the 8th round.

Joey Hernandez’s career isn’t going to so well right now, as he’s lost 2 out of his last 3 fights in defeats against Julian Williams and Cornelius Bundrage. Hernandez also has a stoppage loss to Ed Paredes four years ago.

“Hernandez is a tough, hungry fighter who believes he can beat me,” Trout told ESPN.com. “[He is] also a fellow southpaw, which is troubling for anyone. I’m calling it a stay-busy fight but not training like it is just to stay busy.”

Trout needs to get at least one victory over a top fighter in the 154lb weight class if he wants to get a No.1 ranking by one of the sanctioning bodies, which is probably what it’ll take for him to get a world title shot at this point in his career. I don’t think any of the champions are going to pick the southpaw Trout out in a voluntary defense because he’s just too difficult to fight unless your Erislandy Lara, who is a southpaw himself.

“Beating Hernandez will set me up for a fight with a fellow top junior middleweight contender such as Julian Williams, the Charlo twins [Jermell or Jermall] or even a title shot against Demetrius Andrade by the end of this year,” Trout said. “2015 was my ‘get back’ year and I plan to be at the top by the end of this year.”