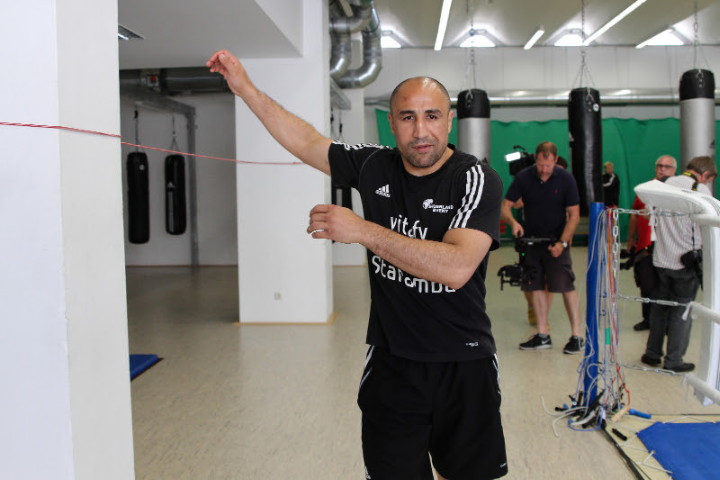 (Photo credit: Sebastian Heger) By Scott Gilfoid: If WBO super middleweight champion Arthur Abraham (42-4 28 KOs) can somehow get past #1 WBO Robert Stieglitz (47-4-1, 27 KOs) in their fourth fight together on July 18th, the Abraham says he wants to look to try and unify the 168lb titles by facing the other champions in his weight class.

The two fighters have faced each other three times in the past threes. Now it’ll be a fourth time on 7/18 at the Gerry Weber Stadium in Halle, Germany.

“My promoter has billed this fight as the ‘Final Showdown’, and that is exactly what it will be,” Abraham said. “There will be no fifth fight. I will bring this rivalry to a successful conclusion and then look for a unification – that is my goal!”

Abraham, 34, says he wants to end his rivalry with Stieglitz, but I see it continuing. My guess is Abraham will lose the fight to Stieglitz on July 18th, making it necessary for there to be a fifth fight. But even Abraham beats Stieglitz this month, I see the two of them facing each other again no matter what.

Like I said, the money has got to be good for them to keep fighting each other, and the German boxing public seem to enjoy seeing Abraham and Stieglitz fight each other over and over rather than them pressing Abraham and his promoter to start fighting other fighters not named Stieglitz.

Thus far, Abraham has beaten Stieglitz two out of the three fights they’ve had with each other. Normally that would be enough to end the rivalry, but Stieglitz has stayed in the same path as Abraham, and the World Boxing Organization has been ranking Stieglitz high off of nothing wins.

“I’m not thinking about retirement. I’m world champion and will remain so for the next two to three years until I chose to leave the sport,” Abraham said.

The only way Abraham continues to hold the WBO belt is if the WBO keeps ranking Stieglitz high at No.1 despite losing to Abraham over and over. I honestly can’t figure out why on earth the WBO has Stieglitz ranked so high with their organization. I mean, he hasn’t beaten anyone good that you would think would give him a high ranking. I don’t see Stieglitz as a top 15 contender. To me, he’s more like bottom 25 at best. I’m talking bottom 25; the very bottom.

Unless Abraham is going to spend the next year fighting two voluntary defenses against bottom 15 contenders, he’s going to need to be fighting Gilberto Ramirez very soon, and I don’t see Abraham being able to beat him.

Abraham looked really bad in his last two fights against Paul Smith. It should have been two easy fights for Abraham but they turned out to be really difficult.

Deontay Wilder to fight on September 26th on NBC, Chris Arreola a possibility »