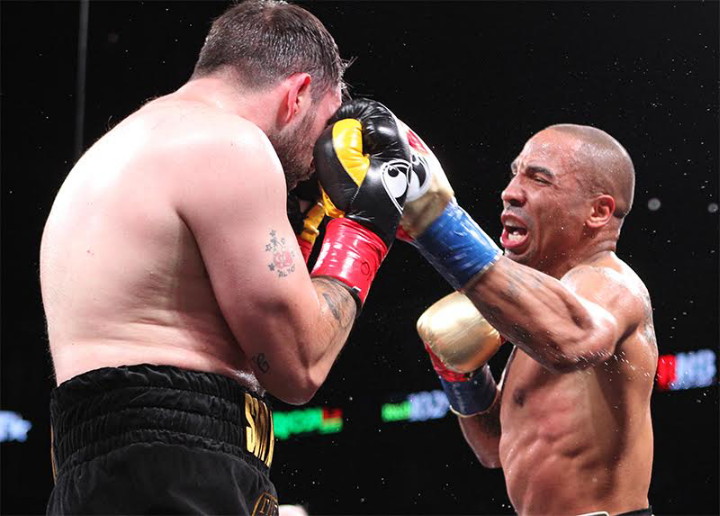 By Scott Gilfoid: After getting blasted out in nine rounds last night by WBA super middleweight champion Andre Ward (28-0, 15 KOs) in Oakland, California, Paul Smith (35-6, 20 KOs) says that Ward isn’t that big of a puncher.

Smith, 32, didn’t say who he’s been in with that is a bigger puncher than Ward, but he obviously feels like Ward isn’t a huge puncher. Just so you know, Smith’s nose was broken in the fight, and that was a first for him.

Smith’s never had his nose broken before. Ward’s power must have been formidable for him to do that to Smith’s nose because you don’t go breaking noses unless you’ve got excellent punching power. In looking at Smith’s nose, it looks like the bridge of his nose have caved in. It looks bad like the type of nose that you’d see from an ex-fighter in the 50s. I wonder if Smith can get his nose fixed or if it’s going to stay like that the rest of his life?

Smith’s corner tossed in the towel during the 9th round after Smith got buzzed by a big right hand from Ward. Both Smith’s left eye and nose was bleeding like a sieve, and it had to have been difficult for him to spot Ward’s shots at that point in the right.

The shots were coming too frequent, with too much power, and with too much accuracy for Smith to be able to block them with his gloves or his bulky cruiserweight-sized frame. The fight was stopped at 1:45 of the 9th round by referee Lou Moret after Smith’s trainer tossed the white towel into the ring to have the fight stopped.

“He’s a class operator, Andre Ward,” Smith said to Skysports.com. “I had my moments here and there, but his class showed through at the end. He’s unbeaten for a reason. He wasn’t the biggest puncher. He doesn’t have the most power, but he was accurate and sharp. He has a very good boxing brain. He’s clever inside as well. I was hoping he would stand and stay open for counters, but he was too quality for that. I don’t know what shot it was, but it landed and broke my nose. I’ve never had that before in my life,” Smith said.

As everyone knows at this point, Smith failed to make the 172lb catch-weight for the fight on Friday during the weigh-in. Smith then failed to make the 181lb rehydration limit on Saturday morning at 11:00 a.m. when he came in at 184lbs. Smith ended up losing $60,000 in fines from his $225,000 purse for the fight.
Ward showed in the fight that he’s still a very, very good super middleweight.

What Ward didn’t show is that he has any chance of beating the top light heavyweights like Sergey Kovalev, Artur Beterbiev and Adonis Stevenson. I think all three of them would be too strong for Ward, and would KO him if/when he moves up to light heavyweight.

Right now, middleweight Gennady Golovkin is probably licking his chops thinking about what he’d do to Ward if he could get him inside the ring, especially after seeing Paul Smith shake up Ward with a big right hand in the 7th. That was a big punch, I must admit. I have no clue why Smith didn’t try and load up on other right hands like that in the fight because he showed major power with that single shot.

Golovkin to Lemieux: Let’s make it happen now, not in the future! »