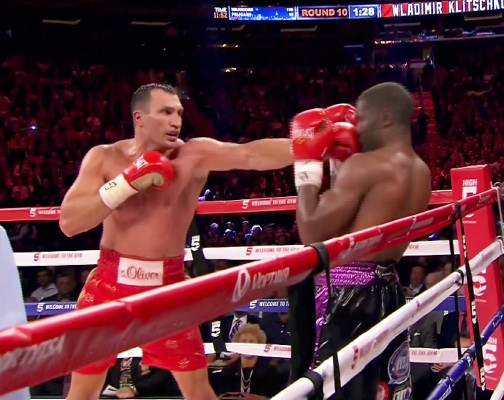 By Scott Gilfoid: IBF/IBO/WBA/WBO heavyweight champion Wladimir Klitschko (64-3, 53 KOs) says he’ll be defending his titles next against his #1 WBO mandatory challenger Tyson Fury (24-0, 18 KOs) in Europe somewhere. Klitschko, 39, says he’s open to fighting in England, but it’s a fight that could also take place somewhere else in Europe.

One would have to assume that Wladimir will elect to stage the fight in Germany where he has a huge fan base and is capable of selling out stadiums over there.
Wladimir is looking very vulnerable nowadays after his poor performance against American Bryant Jennings last April.

Wladimir’s timing and his ability to pull the trigger on his shots seems to have been greatly compromised due to age. Indeed, WBC heavyweight champion Deontay Wilder, who saw the Klitschko vs. Jennings fight, noted that Wladimir looks like he’s deteriorating as a fighter.

If Fury isn’t capable of beating Wladimir at this point in his career then that surely reflects badly on the type of heavyweight that Fury is.

“Yes,” Wladimir said when asked by Skysports.com if he’s going to be fighting Fury next. “He’s pretty much the same generation as Anthony Joshua and [Deontay] Wilder. I think that’s the [new] generation of the fighters in the heavyweight division. I haven’t watched too many of Tyson Fury’s fights. I think he’s more famous for his verbal fighting than his actual boxing fighting. I’ve seen him while he was in my training camp. I’ve seen him sparring a couple of guys, but I can’t say much about him right now. I look forward to a fight in England or in another place.”

Fury is a pretty flawed heavyweight with a chin problem, and not much in the way of punching power. But he’s younger than Wladimir, throws more punches, and is the better inside fighter by far. If Fury can avoid getting hit by Wladimir’s occasional big left hooks in this fight, then you have to give Fury a good chance of winning. Wladimir doesn’t pull the trigger on his punches that often anymore due to his advancing age.

If Fury can avoid Wladimir’s rare left hooks and right hands, we could see an upset in this fight. I wouldn’t call it a huge upset because Wladimir is starting to look like a shot fighter, but it would definitely be an upset. The thing is if Wladimir lands his left hook flush in this fight, I see Fury hitting the canvas and being done for the night. Yeah, Fury could get up from the knockdown, but he’d likely be too punch drunk at that point to get out of the way of Wladimir’s follow up left hooks to the head. Fury would then tip over like a tall tree and get finished off.

What Fury has going against him is his lack of experience against quality fighters. I mean, the best guy that Fury has fought thus far during his career is fringe contender Steve Cunningham, who put Fury down on his backside in their fight in 2013. I don’t rate Cunningham as a good heavyweight, yet he had Fury down. Fury also has wins over Dereck Chisora, but that didn’t prove anything because Chisora is a very, very mediocre heavyweight who has never beaten anyone that you can call a good fighter.

« Miguel Marriaga: I have the strength and intelligence to beat Nicholas Walters

Danny Garcia gives up WBC 140lb title, Matthysse – Postol to fight for it »