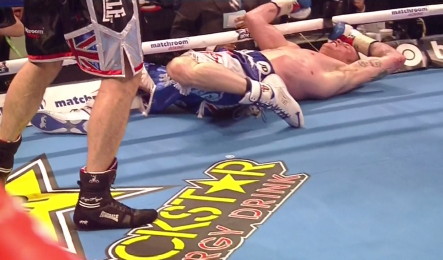 Calzaghe wants to see Groves win the WBC 168lb title off of Jack, and then face IBF super middleweight champion James DeGale in a rematch/unification fight next year. It sounds like a nice pipe dream for Calzaghe, but there are a lot of pieces that need to come together for this fantasy fight to actually take place.

“It’s [Groves vs. DeGale] potentially box office but Groves has to be impressive in his next fight,” Calzaghe said vis Skysports.com. “I think he has got a great chance of winning that world title challenge against Badou Jack.

If Groves hasn’t been blasted into eternity by Carl Froch twice, I would give Groves a decent – but not great – chance of beating a talent like Badou Jack, but with Groves losing his two fights against Froch, I can’t give Groves any chance of winning against Jack. I don’t even see Groves with a one percent chance of winning. I think it’s going to be a clear mismatch with Jack walking Groves down, nailing him in the chin with a huge shot, and then watching him on the canvas as the referee slowly counts to 10.

Groves looked plain awful in his two fights since his massacre at the hands of Froch. Groves beat two weak opponents in Christopher Rebrasse and Denis Douglin, and was shaken up by both of them. The thing is neither of those guys have the kind of punching power and talent that a guy like Jack has going for him, which is why I see Groves getting knocked cold by Jack on August 22nd or whenever they want to stage the fight. Heck, they could put the Groves vs. Jack fight on the undercard of Floyd Mayweather Jr’s fight on September 12th, and it’s not going to change a thing. Groves is still heading for a loss in my humble opinion. Jack is just too good, too strong and dare I say too talented for a guy with a chin problem like Groves.

“He [Groves] was in Chicago watching him win the title and I think he can beat him [Badou Jack] – then it could be box office,” Calzaghe said. “And everybody loves a grudge match!”

Groves vs. DeGale on Box Office? Oh man, I can’t imagine having to pay to see a simple fight like that. Even if Groves were to beat Jack, and DeGale to win his first defense of his IBF strap, I still don’t see Groves-DeGale as a PPV type of fight. I don’t think it’s worthy. DeGale has that close/controversial win over Andre Dirrell, and Groves would be going into the fight with 2 losses in his last 5 fights. How do you pay to see a fight like that when neither of these guys have proven themselves at super middleweight?

Khan: Floyd Sr. knows I’m the guy that could beat his son »