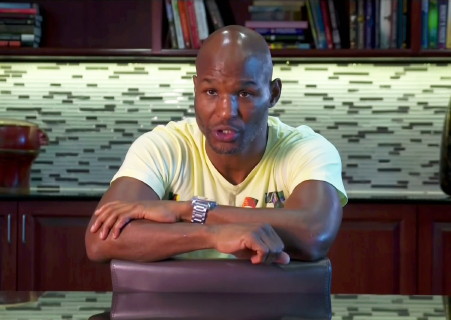 By Scott Gilfoid: Well, it’s looking like IBF super middleweight champion James DeGale (21-1, 14 KOs) will be making his first – and likely his last defense – against 50-year-old talent Bernard Hopkins (55-7-2, 32 KOs) next. According to Fight News, Hopkins is saying that the negotiations for the DeGale-Hopkins fight are in the advanced stages at this point, and moving along very, very quickly.

This would be Hopkins’ final of his career win or lose. He plans on retiring after the fight. Hopkins has been a pro for 27 years since 1988, and he’s done some incredible things in terms breaking records, winning championships, and beating a lot of big names in the sport.

It would be a big blow to DeGale’s boxing career if Hopkins goes over to the UK and whips him in his first title defense of his IBF strap. DeGale’s promoter Eddie Hearn has been blabbering about how he wants to match DeGale against George Groves, if he beats Badou Jack, and potentially Carl Froch if he ever returns to action. But if Hopkins gets to DeGale first by pounding out a 12 round decision in front of DeGale’s own British fans, then it will derail Hearn’s hopes and dreams of a DeGale-Groves or DeGale-Froch fight. I mean, I’m sure the DeGale-Groves 2 fight could eventually still happen in the future, but it would take a lot of rebuilding for DeGale to get to that stage. Even then, I don’t know that it would be as big as it would if DeGale were to keep winning long enough to take the fight in 2016.

“Fast, very fast. I would love to touch base and land in London to be able to make history over the pond,” Hopkins said about his negotiations with DeGale via Fightnews.com. I have a big fan base in London. I would like to go and give them a show at this level, at this stage that they would never forget.”

Despite Hopkins saying that the negotiations are going quickly with DeGale, I would still be very surprised if Hearn chooses this route for him. Hopkins is still very good at this point in his career, and I can see him out-boxing DeGale and making him look silly. If it’s possible, and I don’t know that it is, I see Hearn matching DeGale against Mikkel Kessler or Lucian Bute. However, I have some doubts whether those guys will take the fight with DeGale, given that they’ve both been out of the ring for such a long time.

Those guys would likely want tune-up bouts before fighting for a world title against someone who doesn’t have a big name like DeGale. Now if this were Froch who were offering Bute or Kessler a shot at fight, I could see them taking the fight straightaway due to the huge money they would get against him. But fighting DeGale isn’t a huge a money fight for Kessler and Bute, so I don’t see them taking it. Hopkins might be the only big name that Hearn can get for DeGale. To be sure, it’s a risky fight for DeGale and Hearn, but if DeGale wins it, he’ll have more of a name. If he loses, then I think his career would be in a death spiral.

Danny Garcia vs. Paulie Malignaggi on August 1st on ESPN on PBC in New York »