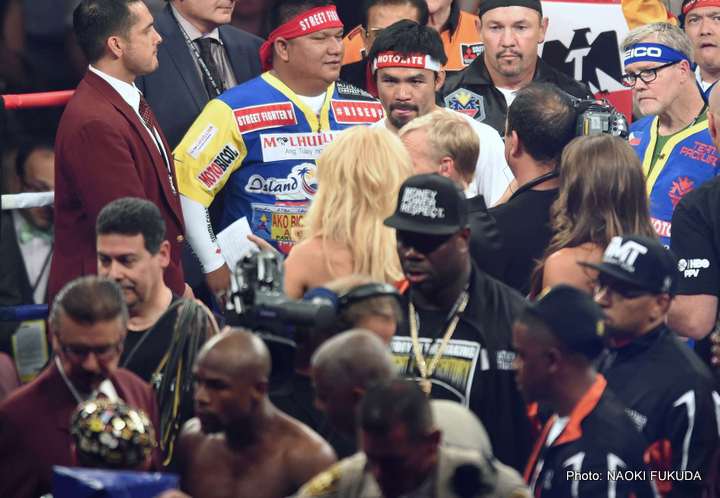 By Abbas Dadhiwala: Floyd Mayweather Jr. vs. Manny Pacquaio was supposed to be the biggest fight of the century, the uber-cool fight, but it ended up being one of the most boring and uninspiring fights i have witnessed in a long time in boxing.

This was the fight that was going to show the world why boxing was still brilliant, people have viewed boxing as a sport nowhere near the level of times gone by, too many belts, so many meaningless fights. This was Ali-Frazier, Hagler-Leonard, Holyfield – Tyson all rolled into one. The most expensive ringside seats, the most celebrities attending, the highest pay per view figures. Bu in reality, the so-called fight of the century was pay-per-snooze, a complete waste of everyone’s time and money. It was sparring but with spectators, a ring and loads of TV cameras.

Both boxers should have fought five years ago, we have Pretty boy Floyd at 38 years of age and Pac-man at 36 years of age. Manny has had too many wars, to be still young at 36. He faced a size disadvantage that even brilliant footwork and fast hands couldn’t help. Mayweather has always been the man, the boxer who hypes himself up so much and makes money from everybody around him. . He has everything a boxing star should have, with all the charisma and style we expect from stars of the sweet science. Floyds issue is nobody likes him.

After the first couple of rounds it was obvious Floyd was going to be the victor, other than a couple of “ooooh” moments from the crowd in round 4 and 6, Manny never landed a meaningful punch all night. This wasn’t the Manny i knew, no feet movement, no hand speed, no hatred of Mayweather, hugging him start of round 12, tapping gloves after every round, this was supposed to be the creme de-la creme of boxing, it ended up looking like a pillow fight. My brother paid £24.95 to get the fight on Sky box office, i have a right mind to call up Sky asking for a refund. When Mayweather was announced victor, the losers was not Pacquaio who made $60 million. It was the millions of fights fans that shelled out for this bore-fest.
Boxing is dead and the guys to have killed it are Floyd Mayweather and Manny Pacquaio. Pacquaio even had the cheek to claim to have won the fight, am sorry son, you sold your soul to the devil and walked away with $60 million, thanks for nothing.

« Jack Culcay ready for Maurice Weber – This Saturday In Germany

Pacquiao to have surgery this week to repair right shoulder, expected to miss 9 months »