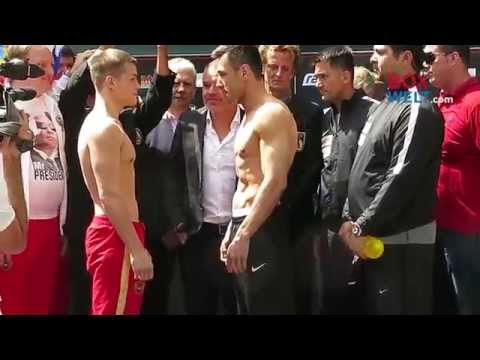 By Scott Gilfoid: Carl Froch being stripped of his WBA 168 pound strap by the WBA earlier on Friday has opened the door for #1 WBA Fedor Chudinov (12-0, 10 KOs) and #2 WBA Felix Sturm (38-4-2, 18 KOs) to fight for the vacant WBA super middleweight title this Saturday, May 9th in their fight at the Festhalle, in Frankfurt, Hessen, Germany.

The winner of the Sturm-Chudinov fight will be the new WBA regular champion at 168. It’ll be interesting to see if the WBA then tries to force the winner to face WBA Super World champion Andre Ward like they were attempting to do with Froch.

My guess is no. The winner of the Sturm vs. Chudinov fight will likely be able to go their own way rather than take on Ward and immediately get dominated.

Sturm, 36, arguably doesn’t deserve to be fighting for the vacant WBA 168 pound title because he’s 0-1-1 in his last two fights. He fought to a 12 round draw against former two-time WBO super middleweight champion Robert Stieglitz last November. Before that, Sturm was beaten by 40-year-old Sam Soliman by a 12 round unanimous decision last year in May.

Despite those two poor performances from Sturm, the World Boxing Association ranked him #2 with their organization and will be having him face the unbeaten and totally untested Chudinov on Saturday. The 27-year-old Russian born Chudinov is coming off back to back wins over Ben McCulloch and Andy Perez. Chudinov clearly hasn’t been tested since turning pro, and it’s hard to imagine what will happen on Saturday.

Like his brother Dmitry Chudinov, who was recently beaten by middleweight contender Chris Eubank Jr. last February, Fedor lacks hand speed. He’s very slow. However, he can punch a little, and there’s a possibility that he might be able to defeat Sturm. I don’t think it’s likely though. Sturm will use his jab and stay on the outside to control the fight from a distance all night long to capture the vacant WBA title.

Once Sturm captures the WBA title, he’s very likely going to face WBO super middleweight champion Arthur Abraham in a unification fight this year. The winner of that fight will have two of the four world titles at 168, and they’ll likely turn around and face Stieglitz. Abraham has already fought Stieglitz three times in the past three years. Stieglitz keeps getting chances despite him losing two of his three fights against Abraham. The WBA has Stieglitz ranked #1, which is obviously an odd ranking given his lack of quality wins in the past two years.

« Canelo vs Kirkland Live On BoxNation This Saturday

Khan: I won’t be fighting Mayweather until I beat Algieri »