Mayweather-Pacquiao: the Biggest Fight Since…? 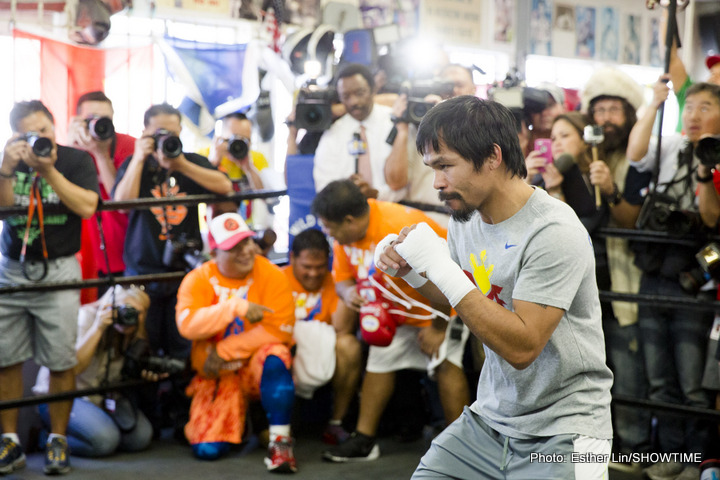 By Matt O’Brien: Depending on the news source and the size of the hyperbole employed, the super-fight between Floyd Mayweather Jnr. and Manny Pacquiao is variously described as “the biggest fight in history” or else “the biggest fight since [insert 80’s super-fight]”. In one sense, of course, such statements are undeniably true: barring a catastrophe the May 2nd event will smash every box-office record in the book. In another sense though, basing our assessment of the bout’s “super-fight” status purely on its ability to generate dollar signs may be misguided, for a number of reasons.

Firstly, even accounting for inflation over time, it’s hard to compare profits from the PPV-driven, social media-orientated world of 2015 with boxing’s previous eras on a level playing field. Consider the global reach fights like Ali-Frazier or Leonard-Duran-Hagler-Hearns would have achieved had they taken place in the post-Twitter, PPV age; or consider how much further a man like Ali’s already world-renown charisma could have stretched. It is not hard to imagine them easily surpassing anything on the market today.

Secondly, and perhaps more importantly, although the financial upside is a strong indicator of how big a boxing event is, money is nevertheless only one aspect of what makes a super-fight truly “super”. The quality, timing and competitiveness of the match-up, the pugilistic pedigree of the participants and the relevance of the fight to the story of its era as a whole all contribute to the historical significance or “size” of a super-fight just as much, if not more so, than the profits.

In fact, taking these other factors into consideration, perhaps we don’t need to go back nearly as far as the Ali era or even the fabulous Four Kings of the 80’s in order to find a contest that competes with the May 2nd blockbuster in terms of its magnitude as a boxing match and historical “super-fight” status.

In this two part series, I look at ten of the biggest boxing events from the last twenty-five years and consider their “super-fight” credentials against Mayweather-Pacquiao.

Together Mayweather and ‘Canelo’ set the current record for the most profitable PPV boxing match in history – generating a reported $150m in revenue. The 2.2 million buys that helped to secure the whopping financial return also placed it second in the all-time list for number of units sold (the higher PPV price earning it more money for less sales than the previous record holder).

The match was certainly considered an extremely dangerous one for Mayweather at the time and a genuinely competitive fight. While the fiery-haired Mexican was a bona fide world champion and an undefeated Latino star in his own right, it’s also true that outside of the Mexican fan base, he did not have anything approaching the wider appeal that Pacquiao does. Even inside of the hardcore boxing circles, it was generally accepted that the young Mexican’s talent had probably not yet matured to its full potential, and he was somewhat compromised by Mayweather’s insistence on a catch-weight 2lbs below the traditional light-middleweight limit.

Verdict: A record-breaking contest and an intriguing boxing match, but one that is flattered somewhat by its incredible PPV numbers. In terms of boxing history, it’s a bout that is surpassed in every aspect by the Mayweather-Pacquiao fight.

‘The World Awaits’ was the super-fight that broke all records: highest grossing live gate ($19m); most ever PPV units sold (2.4m – still the record); highest total gross revenue ($136m); and biggest purses for two fighters in one fight (DLH taking home $52m, Mayweather making a cool $25m). It is fairly easy to see why: De La Hoya was a crossover star the likes of which comes around once in a generation (the fight made him the highest selling PPV fighter in history, with over 12.8m buys). He also happened to be meeting the undefeated, consensus pound-for-pound no.1 fighter in boxing. In that sense, it was a fairly easy sell.

The fanfare that accompanied the Golden Boy’s professional inauguration and rise to the top, along with his bilingual American/Latino charm in comparison to Pacquiao’s Filipino roots, lack of fluid English and rise from relative obscurity probably also give the event a head-start against May-Pac in terms of appealing to the widest possible audience. The catch here comes with De La Hoya’s age: it was effectively the Golden Boy’s last hurrah as a competitive force, in a brilliant career that had peaked almost a decade earlier.

Verdict: A great match-up on paper that ultimately failed to deliver in the ring. A “bigger” fight than Mayweather-Pacquiao only in the sense that De La Hoya was a bigger star than Pacquiao is. While the global appeal of the event was huge though, it lacked the same historic rivalry and from a purely boxing perspective wasn’t nearly as meaningful due to their contrasting career trajectories at the time of the fight.

Another financial blockbuster that managed to break the much sought “1 million-PPV” barrier. Aside from the Golden Boy’s aforementioned drawing power, it was a bout that also carried genuine historical significance, with the winner becoming the first man in history to hold all four major sanctioning belts simultaneously in a division. The Golden Boy was also reaching for a lineal title in an incredible 4th weight class, and drew parallels with 80’s star Sugar Ray Leonard as a former welterweight champ seeking to dethrone the middleweight king.

The event was far from a one-man show though: at this point, Hopkins was largely considered the defacto P4P no.1, having filled the gap between the demise of Roy Jones Jnr. and the still maturing Floyd Mayweather Jnr. It also represented his 19th defense of the middleweight crown – a record in its own right.

Verdict: The unification of all four belts combined with DLH’s star power and the intrigue created by the clash of sizes, styles and personalities give this match a lot of historical clout. The fact is though that De La Hoya simply didn’t belong in the middleweight division, and despite Hopkins’ credentials, he lacked the wider appeal of many of his contemporaries. In terms of its meaningfulness to the sport as a whole, it has to rank a level or two below Mayweather-Pacquiao.

Economically, this one doesn’t come close to the May 2nd extravaganza – “only” securing a reported 600,000 PPV buys and guaranteeing the chief protagonist a measly $10m. It is easy to forget though just how far the original ‘Superman’s’ star has fallen since these glory days, and how significant the bout was considered at the time. A number of respected commentators were questioning whether Jones should be considered “the greatest boxer ever” – and the question was taken seriously, even by those who thought the comparison a bit excessive. This remains in stark contrast to Mayweather’s almost comical cries of “TBE”, which tend to generate little more than an involuntary smirk from anyone outside of The Money Team.

Here, Jones was attempting to become the first former middleweight champion in over 100 years to win a version of the heavyweight title, as well as picking up a championship in his fourth weight class. The apparent 30+lbs size discrepancy between the light-heavy king and WBA heavyweight title owner Ruiz provided a further unique element of dangerous intrigue to the contest. On the downside, it was clearly a promotion carried by one superstar with the other boxer a relatively unknown quantity selected as the perfect foil.

Verdict: A monumental, historical achievement from Jones, but the one-sided nature of the event as a whole means that the May 2nd fight will comfortably surpass Jones-Ruiz in terms of significance as well as financial clout. (Had Jones taken on the lineal heavyweight champion Lennox Lewis however… now that would be a different story).

When it comes to “mega-bouts”, few in history compare with this mouthwatering heavyweight spectacle. Two genuine, global super-stars; a back-story that outstretched Mayweather and Pacquiao’s by about ten years; a press conference brawl (and customary “bite” from Mr. Tyson); and the greatest prize in sport on the line: this one had everything. Well, almost everything – the obvious flaw (as with Mayweather-Pacquiao) is that both men were past their peak years (Tyson especially so).

The story of Mike Tyson – warts and all – had captured the imagination of the public in a manner unheard of since his heyday and arguably before. For much of his career he was not just the most famous boxer in the world but one of the most recognizable faces on the planet. His mean persona and often-crazed behaviour was juxtaposed against the enigmatic, chess-playing, laidback Rastafarian Lennox Lewis – a consummate professional and master boxer who carried one of the most respectable heavyweight championship records in history to boot. Factor in Lewis’s two prior knockout defeats and supposed fragile whiskers with Tyson’s aggressive, power punching style, and it is easy to see why this fight became the highest grossing event in history, generating a reported $107m from 1.95m PPV units sold. It remains the highest grossing heavyweight fight to this day.

Verdict: There are a number of similarities between these two super-fights: Pacquiao and Lewis both coming back from vicious knock-out defeats in the years preceding the bout; both fights many years past their most meaningful date; both fights, nevertheless, providing the final chapter to the story of a generation. And while Mayweather-Pacquiao have a clear edge in terms of their current pound-for-pound credentials; Lewis-Tyson carried with it the inescapable mystique and gravity the heavyweight championship of the world brings to the table. Factor in Tyson’s unique, almost hypnotic hold on the public consciousness (even at this late stage of his career) and in many respects, I think there’s a good case that the Mayweather-Pacquiao fight is trumped by the magnitude of Lewis-Tyson. Together these men represented a monumental clash of egos in a match that appealed to an audience far outside of the traditional boxing base and stretched well into the realm of mainstream sports. (Admittedly, there might be a degree of bias creeping into my assessment here, owing to the fact that I was so invested in each man’s career – but I’ve no doubt that others who lived through the era will relate to this contest in a similar way.)

Mayweather-Pacquiao: the Biggest Fight Since…? Part 2 »