Anthony Dirrell in showcase fight against Badou Jack on 4/25 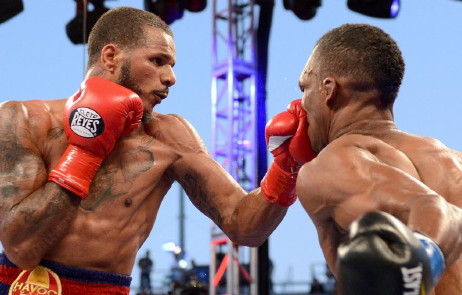 (Photo credit: Sumio Yamada) By Scott Gilfoid: In a little over two weeks, WBC super middleweight champion Anthony Dirrell (27-0-1, 22 KOs) will be putting his unbeaten record on the line in showcase fight against Badou Jack (18-1-1, 12 KOs) on April 25th at the UIC Pavilion, in Chicago, Illinois, USA. This is Dirrell’s first title defense of his WBC belt that he won off of former WBC champion Sakio Bika last year, and Dirrell wants to put on an impressive performance.

Jack, 31, has the power and the talent to make this an interesting fight for a while. It’s going to be a good fight for as long as it lasts because Jack is one of those types of fighters who is willing to go out on his shield. He’s looked really good in his last two fights in beating Francisco Sierra and Jason Escalera. He came out swinging in both of those fights and put a real hurting on them in the process of picking up the victories.

Before those two fights, Jack was stopped in the 1st round by the big punching Derek Edwards in February of last year. I’m sure Jack would be the first to admit that he made a mistake in that fight by dropping his guard while he was throwing one of his own power shots. Unfortunately for Jack, he had to learn the hard way to never let his guard down when throwing a shot.
The fight that some boxing fans want to see is Dirrell vs. former two time world title challenger George Groves. That match-up is going to need to wait until after Dirrell gets through with his business against Badou Jack this month. Groves is Dirrell’s WBC mandatory challenger, whether Groves deserves to be or not. Dirrell has to take the fight.

Dirrell doesn’t have any choice but to take the fight against Groves because he’s his mandatory and he has to take the fight. It’s not the big money fight that Dirrell is looking for though. He wants to face the bigger names like Carl Froch, not the guy that he’s knocked out twice in a row in his last two fights.

Dirrell needs to get rid of Jack as quick as possible on April 25th. The last thing Dirrell wants to do is give Jack any kind of hope in this fight.

On the undercard of the Dirrell vs. Jack fight will be WBA middleweight champion Daniel Jacobs (28-1, 25 KOs) making his first defense of his WBA title against the big hitting Caleb Truax. This is potentially a really tough fight for Jacobs because Truax is a hard puncher, and he’s looked really good lately in defeating Derek Ennis and Don George.

Truax has improved a great deal since losing to Jermain Taylor three years ago in a 10 round decision loss. If there’s one thing that you can say about Jacobs it’s the fact that he is vulnerable to big punchers. It was that way in the past and I’m pretty sure that nothing has changed in that regard. If Truax can get to Jacobs’ chin, he’s going to have an excellent chance of knocking him out.

« Gavin: I think I’ve got the skills to beat Kell Brook