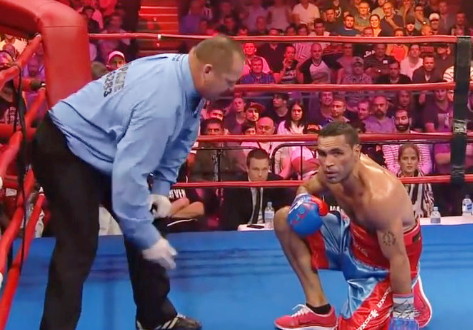 By Dan Ambrose: The soon to be 40-year-old former WBA super middleweight champion Anthony Mundine (47-6, 27 KOs) is hoping that a victory over former WBA 154lb champion Austin Trout (28-2, 15 KOs) will lead him to big fights against Miguel Cotto, Floyd Mayweather and Saul “Canelo” Alvarez in the near future.

The contracts for the fight still have yet to be signed though. Trout jumped the gun by announcing the fight before it was ready to be announced. He ended up backtracking by saying on his twitter:

“As most of you know, a fight between Anthony Mundine and I is almost done, but neither sides have signed a contract. My coach jumped the gun. I have to apologize on behalf of Team Trout for the unscheduled premature announcement. It wasn’t supposed to be like this.

Mundine recently defeated Sergey Rabchenko by a close 12 round split decision last November to capture the WBC Silver junior middleweight title. This was a good bounce back win for Mundine after he had been badly beaten by 37-year-old Joshua Clottey last year in April in a one-sided fight.

Just based on how badly Mundine was beaten in that fight against Clottey, he’s quite lucky that the WBA and WBC have him ranked so highly. When you get dominated as bad as Mundine did against Clottey, you would think that it would have dropped Mundine down to the bottom of the rankings. But the win over Rabchenko, an unproven fighter, has Mundine ranked highly, at least for now.

“After that I want the best fighters in the world,” Mundine said via Thewest.com.au. “Cotto or Alvarez. Trout fought them both. He beat Cotto and he lost a close decision to Alvarez. I want to show the world if this fight is signed that I’m on a different level to Trout. I’d like to fight Mayweather too. Stylistically it’d be a good fight. He has a great mind and a great worth ethic.”

It’s not realistic for Mundine to be holding out hope that he’ll be able to get a fight against Cotto, Canelo or Mayweather. Beating Trout would be nothing at this point, because he’s not a big name, and he’s not looked like the same fighter he once was ever since his loss to Canelo in 2013.

Trout has since been beaten by Erislandy Lara and struggled to defeat Luis Grajeda and Daniel Dawson. Mundine needs to beat the Charlo brothers and someone like Demetrius Andrade before he can start talking about wanting to fight Canelo. I think it is way too late for Mundine to get a fight against Mayweather or Cotto.

If Mundine wanted a fight against those two, he should have started fighting in the United States earlier in his career, because he’s probably too much of an unknown with the casual boxing fans for him to get the big names to fight him.

Mundine has been a pro for the past 15 years, and yet he’s only had one fight during his entire career in the United States. That was against journeyman Bronco McKart in 2012 in Las Vegas, Nevada. For Mundine to get a fight against Canelo, he’s probably going to need to fight in the U.S and he’s going to need to defeat the top contenders and/or champion Demetrius Andrade. Even then, I don’t see him being a big enough name to get Canelo. Like I said, Mundine can pretty much forget about getting Cotto or Mayweather to fight him. That’s not going to happen.

Kell Brook: Jo Jo Dan has earned the right to be in the position he is in »