What is next for Terence Crawford 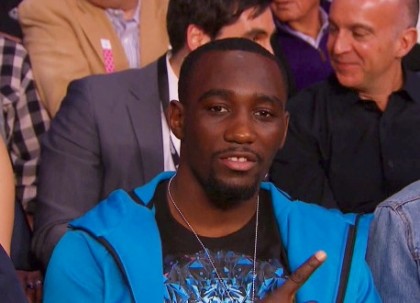 By Gav Duthie: Terence Crawford is penciled in for a fight on April 18 date in his hometown of Nebraska but as yet no opponent has been named. After only two successful defences of his WBO lightweight title against Yuriorkis Gamboa and Raymundo Beltran it has been suggested he may step up into the 140lb division. This article looks at possible next opponents for Crawford as defences and how he is likely to fair as a Light Welterweight in the future.

It is difficult to predict if Crawford will defend his title or move up for his next fight. The WBO title is currently vacant in the light welterweight division and Crawford has been told he would be the number 1 contender at 140 if he decides to take the step up. He has already admitted that he will step up at some point because the money at 135lbs is unlikely to be good enough nor is the profile of fights. Even a unification bout would bring names like Jorge Linares (WBC), Richar Abril (WBA), Mickey Bey (IBF) of which none are particularly mouth watering. If he is to defend his title two potential opponents are.

Juan Diaz – I was surprised to see the other day that he is the #1 contender with the WBO at lightweight and by far the biggest name in the division. The high ranking is more likely due to past successes rather than anything he has done recently. He used to hold the title before losing it to Juan Manuel Marquez before he retired in 2010. He returned in 2013 and has won 5 fights but none of them of any particular note and certainly no title eliminators. This however would be a decent name on his resume and would sail to a unanimous points victory.

Jose A. Gonzalez 23-1 (18) – Still ranked #10 with the WBO despite only making his comeback fight with a second round stoppage in December 2014 after his loss to Ricky Burns the year previous. Although one can’t argue that Gonzalez bottled it against Burns I would like to see this fight because I thought he was outboxing the Scot better than Crawford did prior to the stoppage.

If he was to fight for the Light welterweight title straight away the closest ranked fighters to Crawford are Chris Algieri, Lucas Matthyse and Ruslan Provodnikov. I feel Crawford s skilful enough to travel through the weight classes seamlessly with his height, reach, speed and switch hitting. Much like Floyd Mayweather I would expect his high knockout rate to diminish the higher he goes but unlike Adrien Broner he doesn’t stand in front of his opponents asking to get hit. In saying that Algieri, Matthysse and Provodnikov represent huge tests. They could become his undoing much like when Mayweather moved straight up to 135lbs to challenge WBC champion Jose Luis Castillo. He really struggled with the strength and power and Matthysse and Provodnikov would be no different.

I think he should take the step up. If he were to win a world title in his first fight he would propel himself into the top p4p fighters. With Danny Garcia, Lamont Peterson and Ruslan Provodnikov likely to ply their future trade at 147 Crawford could be dominating the division in no time.

The heirs to Mayweather’s throne »