Cotto-Canelo will need to move off May 2nd date for Mayweather vs. Pacquiao 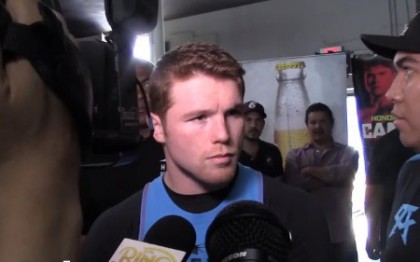 By Dan Ambrose: Manny Pacquiao’s positive news on Sunday about his fight against Floyd Mayweather Jr likely to be ready to be announced by the end of this month means that Saul “Canelo” Alvarez and Miguel Cotto will need to get ready to move off the May 2nd fight date that Mayweather wants for the Pacquiao fight date.

The Mayweather-Pacquiao fight is said to be taking place on May 2nd at the MGM Grand in Las Vegas, Nevada. That fight obviously is a much bigger match-up then the Cotto-Canelo fight. There’s no comparison at all between them.

Previously, the 24-year-old Canelo has been steadfast in his refusal to budge from the May 2nd date, which falls on the Mexican holiday Cinco de Mayo. Canelo is said that he doesn’t care if Mayweather fights on that date. He would still fight on May 2nd in order to retake the date for the Mexican people.

The major pay-per-view distributers aren’t going to be able to televise two separate pay-per-view fights on the same night, so this means Canelo is going to get bumped off the date no matter how badly he wants to stay on it.

Canelo’s promoter Oscar De La Hoya has been telling him repeatedly that he would make sure he got the May 2nd date for him, but obviously De La Hoya has no control over the situation when it comes to Mayweather and Pacquiao.

Their fight will likely end up being televised by both HBO and Showtime, and that means there won’t be a way for Canelo to have his fight against Cotto televised on HBO the same night as competition for Mayweather.

Arum can say no, but then that will likely lead to Pacquiao not getting the fight. Arum needs to break the news to Cotto that his fight against Canelo is going to need to be moved off the May 2nd date, although I don’t know that Cotto is too bothered by the idea.

There are already reports that Cotto’s management are looking at June 6th or June 13th for the fight. It’s perfect for Cotto if they televise it on June 13th because that’s the same weekend as the Puerto Rican Day parade.

« Mayweather has five day deadline to decide on Khan fight