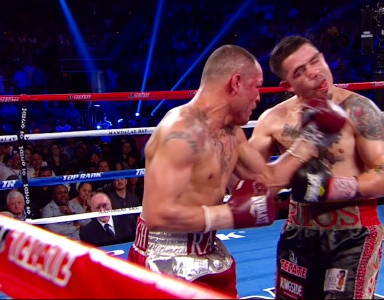 By Dan Ambrose: Boxing fans can begin purchasing tickets for the January 24th rematch between Brandon Rios (32-2-1, 23 KOs) and Mike Alvarado (34-3, 23 KOs) for their fight at the 1stBank Center, Bloomfield, in Colorado, USA.

This is the third but likely not the last fight between the two fighters. Both of them appear to be heading downhill in terms of their careers, but it’s still a fight that casual boxing fans will want to watch due to their lack of defensive skills and the tendency of their fights turning into brawls.

Their last fight was far from a brawl though, and perhaps boxing fans have amnesia about that fight because it was a fight where Alvarado used movement for 12 rounds to win a decision over Rios.

Rios would appear to have the most left of the two, but even he doesn’t appear to have the skills to match up with the top welterweights in the division. Rios is coming off of a fight against Diego Chaves in which Rios was on his way to losing when the referee suddenly disqualified Chaves in the 9th round of a 10 round bout for him throwing a phantom elbow.

I’ve watched the fight three times and seen the 9th round in slow motion, and I’m still unable to spot where Chaves threw an elbow in that round. The disqualification saved Rios from a likely loss, and he’s quite fortunate that the fight was halted because he was really struggling against the Argentinian fighter.

The winner of the Rios-Alvarado fight can keep alive their hopes of getting a fight against Top Rank fighter Manny Pacquiao in the future. Rios has already fought Pacquiao and been easily beaten by him, but if Rios can pick up a couple more wins he’ll likely find himself back in the ring with Pacquiao for a second fight at some point.

Arum unsure if Mayweather-Pacquiao fight can be made »