Arum’s excuses to stop Mayweather vs Pacquiao on May 2nd 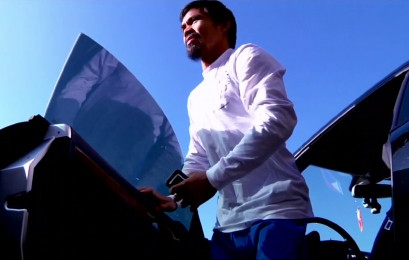 By BP: Bob Arum has yet again come up with another excuse to block the Mayweather vs Pacquiao Fight from happening.

Bob Arum said he would go to the Philippines to meet with Pacquiao and present him with the names of four possible opponents for May or June: Miguel Cotto, Marquez, Lamont Peterson and Timothy Bradley Jr.

Until Mayweather’s legal team pleaded to have jail term delayed five months in order to fight in May. The judge delayed Mayweather’s sentence to June 1, 2012.

“My Jail Sentence was pushed back because the date was locked in. Step up Punk” Mayweather Tweeted out.

Bob Arum responds to Mayweather taunts to Fight Manny Pacquiao May 5th, 2012. Arum went on about a temporary stadium he wanted to have built just for the Mayweather-Pacquiao fight to sit more attendants than the 16,000-seat arena the MGM Grand sits.

Boxing analyst Dan Rafael interviewed Bob Arum by phone, and He asked Arum now that Mayweather is available would he be mentioned in the conversation when he meets with Pacquiao the next week.

Arum responds, “We’re fighting in June, one of the four guys,” Arum told ESPN.com. “My mission is to go over to the Philippines and talk about these four guys. If Manny feels he wants to go in May, he will tell me. I want to make sure Manny’s cuts are healed. We won’t fall under this kind of pressure. June is much more likely for Manny’s fight, not May”

After a dispute over the date and many other things, talks of Mayweather-Pacquiao fail apart. Fast forward two years later talks are heating up again after Manny Pacquiao’s dominant unanimous decision win over Chris Algieri, and Mayweather recently calling Manny Pacquaio out to fight May 2nd, 2015. Now in response to Mayweather wanting to square off in the ring with boxing rival Manny Pacquiao on May 5th, 2015. Bob Arum responds to RingTV.com.

This is an interesting statement made by Bob Arum seeing as though Manny Pacquiao squared off against Ricky Hatton May 2, 2009, and Also Shane Mosley May, 7, 2011 both on Cinco de Mayo weekend, but neither of those fighters are Mexican. Bob Arum goes on to say to the Telegraph.co.uk “I think it’s disrespectful not to have Canelo fight on their holiday, I see Mayweather as poaching on a Mexican holiday and being disrespectful to the Mexican people. April or June would be fine for that fight what difference does it make?”

If it doesn’t make a difference then why would Arum bring up his dissatisfaction of agreeing to May 2nd? Why does Arum insist on role-playing as if he is A-side in negotiations? Let’s break this down, If Arum finds it disrespectful for Mayweather to fight on May 2nd, then by Arum’s logic wasn’t he also disrespectful when he allowed Pacquaio-Hatton May 2nd, 2009? Also Bob Arum isn’t Mexican himself so how can he speak for the Mexican community.

If Canelo is so prideful of fighting for Mexico on Cinco de Mayo he has the right to, but since you’re fighting for the pride of Mexico why not fight in Mexico? Why is Canelo trying to fight in Las Vegas in America saying it’s for the pride of Mexico, then why not box in Mexico, or is he just trying to win against Mayweather outside of the ring because he failed to do so inside of the ring? Why is Arum putting Cotto-Canelo over his cash cow Manny Pacquiao when neither are Cotto or Canelo Top Rank fighters, Manny is.

Miguel Cotto has come out and stated he doesn’t care about fighting on May 2nd, and that Canelo and him can fight in June. Oscar Dela Hoya have also stated to Dontae’s Boxing Nation, “If Mayweather-Pacquiao happens I will convince Canelo to move off that date.” Pacquiao beat Cotto, Mayweather beat Cotto and Canelo, and you’re telling me the two biggest stars in the sport of boxing are being forced off a date just so two fighters that have already been beaten by them can fight on the date? A contract by both sides in the possible Cotto-Canelo fight has yet to be signed by both parties, and seeing as Cotto is A-side in that fight I wouldn’t be surprise if he tells Canelo they’re fighting in June or no fight.

Mayweather comes out and makes a statement on Showtime boxing that Bob Arum is blocking the fight, when Bob Arum is asked about Mayweather’s comments he responds, “No comment”

Let’s go back to the quote of Arum saying in 2009, “It’s not so much that I give a damn whether this fight happens — I don’t — and for me it’s not the greatest experience doing a promotion with Floyd Mayweather”

A saying goes that if you want the closest thing to the truth seek it before there is time to rehearse a different narrative. Arum told the truth back in 2009 when this fight was just starting to be talked about, now that he has had time to rehearse a different story five years later, his tune changed to he’s excited about the fight, Mayweather is running, there is no problem on their side, It’s Mayweather that is reluctant to take the fight. Back in 2009 Arum said point-blank he doesn’t care if the fight ever happens, and in other words doing a promotion with Mayweather is something he wouldn’t be interested in.

I believe that Bob Arum doesn’t like being B-side in negotiations or a fight period. I think his ego will not allow Mayweather, who is a fighter he once promoted, be A-side and in control of a fight with his number one fighter Manny Pacquiao and on top of that giving Mayweather a chance to fight and beat Pacquaio.

In closing I will like to say this, I would like for ESPN or other sports websites to put up a poll for the fans to vote who would they like to see May 2nd. Cotto-Canelo or Mayweather-Pacquiao? I encourage everyone with access to a website that can display a poll system make this poll or also contact various sites including ESPN to considerate making this poll. When fans show votes shattering Cotto-Canelo with votes for Pacquiao-Mayweather there would be no more excuses for Bob Arum, he says Mexicans would be disrespected, even Mexicans want to see Mayweather-Pacquiao over Cotto-Canelo.

And Mayweather could lose that fight. They’re very clever in who they fight and I just can’t see them going for Amir next,” Hearn said.

« Hearn: If Khan doesn’t fight Mayweather, he has to fight Kell Brook