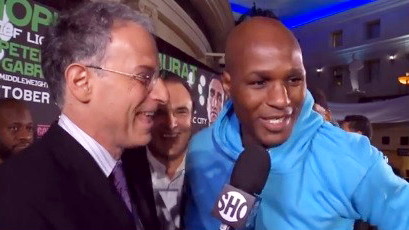 Gav Duthie: Many boxers fail to get the timing right when it comes to avoiding losing to their most dangerous opponent “father time” . Everyone is always looking for that one last payday, one more title shot, they move up or down in weight and convince themselves they still have something left. By normal standards Bernard Hopkins has laughed in the face of father time he is now on ‘grandfather time’ only a couple of months shy of his 50th birthday. Despite this I think you have to look at a fighters longevity on a case by case basis and for me ‘The Alien’ still has a sequel left in him.

Age is just a number

In most sports if you can get anymore out of your body past 35 you are doing well. Fighters like Mayweather is using his ring craft as his legs start to slow at 37, Carl Froch is a tough warrior and started his career late so is still about going at 37 also. Juan Manuel Marquez is an amazing technician and is amazing to be fighting at 41. These guys are impressive enough but Hopkins is a decade older and shouldn’t be treated by normal standards.

Its easy to point the finger and say “Hopkins looked old” or his fights are catching up to him but personally I think he would have struggled with Kovalev at 49,39 or even 29. Hopkins main attribute and the reason he has lasted so long is his ability to make his opponents look bad. He smothers their work he holds, he counters he moves around and he bullies you. Kovalev has a longer reach and is a natural light heavyweight, he is bigger and stronger. Hopkins realised very early he couldn’t bully Kovalev and the Russian had the range advantage. If he tried to counter Kovalev’s body jab with his overhand right Kovalev would step back and counter himself. Of course Hopkins would have had a better chance 10 years ago but lets not just say he lost because of his age because that is just lazy.

Back to his previous legacy

Hopkins was 40 years old when people were last calling for his retirement. It was all the way back in 2005 when he lost back to back fights to Jermaine Taylor and look what he has achieved since. He has been fairly dominant at light heavyweight skipping Super Middleweight altogether and beating the likes of Antonio Tarver, Kelly Pavlik and Jean Pascal and unifying titles in defeating Tavoris Cloud and Beibut Shumenov. After 2005 Hopkins changed his legacy from being the Executioner to the Alien. The talk before his losses to Taylor were if he could be the greatest middleweight of all time. He already holds the record for most middleweight defences, 20, but is generally considered behind Carlos Monzon and Marvin Hagler.

This is why I think his best move is to fight Gennady Golovkin.

Hopkins has said in the past that he is willing to fight Mayweather at Middleweight or Golovkin so I am assuming he genuinely feels he can make the weight. He would be unlikely to be knocked out by GGG and he would habe a better chance on the inside and his strength would be more apparent. Golovkin has a huge chance of beating Hopkins record but he needs a big name win to prove his quality. I think this could be a beneficial fight for both. If Hopkins was to lose again I would agree he should retire but I still think he has something left as he approaches the half century mark and a win over Golovkin could make him the greatest middleweight of all time.

Hopkins vs Kovalev drew in big numbers on HBO »