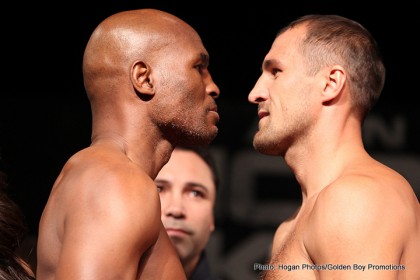 The world’s oldest ever world champion Bernard Hopkins believes that he has no place on boxing’s pound-for-pound list.

The current WBA and IBF light-heavyweight world champion is gearing up to face hard-hitting Sergey Kovalev this Saturday night on BoxNation in an edge of the seat unification clash, which will also see the Russian’s WBO belt up for grabs.

After rebranding himself as ‘The Alien’, due to his remarkable achievements and having become the oldest ever unified champion at 49 years of age, Hopkins says he doesn’t want to be put on boxing’s ‘pound-for-pound’ list which categorises boxing’s elite.

“I respect the pound-for-pound list but you have to do another list for me. You have to sit down and think we can’t put this man in the top 10 because he’s doing something that no one has ever done. 15 years ago my career was meant to have been over,” he said.

The Philadelphian pugilist has seen it all in boxing having risen as an upstart in 1988 before reigning supreme as champion over the middleweight division for a decade before his conquest of the light-heavyweight division.

Against Kovalev he steps in against an unbeaten knockout artist who has scored 23 stoppages from his 25 wins, but Hopkins has a past of overcoming fighters with flawless records having upset the likes of Felix Trinidad and Joe Lipsey.

“I have a history of taking fighters undefeated records – starting with the first big name Tito Trinidad. This is something I have a pattern of doing. This isn’t just hype talk that’s why I haven’t got to holler and shout,” Hopkins said.

“I have a history of taking the ‘O’ away and giving a guy a devastating loss – some haven’t even bounced back.

“But one thing about a puncher is they have a punchers chance. They could be gone till the 11th round then ‘pow wow’.

“They are always dangerous but ‘The Alien’ likes to walk on his tightrope 50 feet in the air, maybe 100, with no safety net but I’m going to make it across the other side,” said Hopkins.

With 65 fights and numerous world titles, Hopkins, who turns 50 in two months, says the fight with Kovalev goes beyond just boxing for him with his hunger to succeed in life a motivating factor.

“When I hear or read or get asked a question like, ‘you didn’t have to take this fight, you could have taken a different fight,’ I think, have you paid attention to my career?,” said Hopkins.

“This isn’t about being an athlete, a boxer or whatever it is. This is something separate. Me as a man, I’ve been here since 1965. I have been special ever since.

“When you’re dealing with the spirit that I carry with me, from my personal life to here, all of that comes together in the ring.

“An opponent, he can be fast, slick or a puncher; you have to face all of these intangibles that I bring to the ring. I don’t mind putting my wits up against anyone’s wits today. I’m so calm and relaxed. I still have that hunger to prove myself,” he said.

Can Victor Ortiz rise from the ashes? »