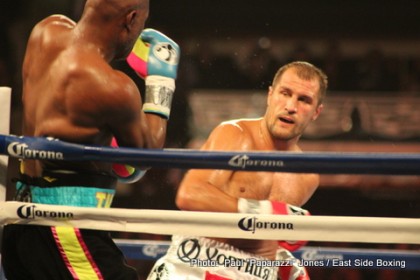 By Yannis Mihanos: Last Saturday night Sergey Kovalev krushed the hopes of Bernard Hopkins of becoming a unified world champion  at the remarkable age of 49.

Prior to that fight, expectation of Hopkins winning the fight had grown substantially big. Could the old horse pull it off again ? Kovalev was also coming with a big hype as he had crushed all his earlier 23 opponents… even if for some were considered tomato cans. As for tomato cans, even Hopkins said in an interview it takes a certain skill to open the tomato can without cutting your hand…

The plan for Hopkins was simple and had been already used with success from Bernard many times in the past: basically it was to let the opponent beat himself by expending all his vital energy reserves, letting him become sloppy and then outgun and defeat him.

The plan was seemingly good and proved effective with other opponents like Kelly Pavlik. But as very intelligently said by boxing coach and HBO tv analyst Roy Jones jr: Kovalev is not Pavlik.

He was dead right. Kovalev was not to compare with any other opponent that Hopkins had faced before. So the plan this time proved faulty. Kovalev was too strong, too big and too patient. The last was the one that ruined the plan. Hopkins kept waiting for Kovalev to make a mistake but it never happened.   Kovalev won almost every round convincingly. It was clear in the entire fight that there was a difference in size and power. It felt like Hopkins was the smaller guy.  To his credit he (Hopkins) absorbed some of the crushing punches and stood tall like a real  champion.

Hopkins also became the only one to last the full 12 rounds against Kovalev. And what can I say about Sergey: he is indeed an impeccable force in this category: too strong for anyone.

So what holds the future for these 2 special fighters?

Someone may wonder for what future am I talking about especially when talking about a 49 year guy…. still, I don’t think that the fight was won by the difference of age. I didn’t feel pity for Hopkins, he came at top physical condition but he clearly lost to a better man. It happens in boxing, it happens in any sports. There is no shame in losing from another great opponent.

Still I sense that Hopkins will continue as he wants surely to quit on his own terms and not because of one unfortunate result.

It was a good plan gone wrong.

« The biggest fights that never happened