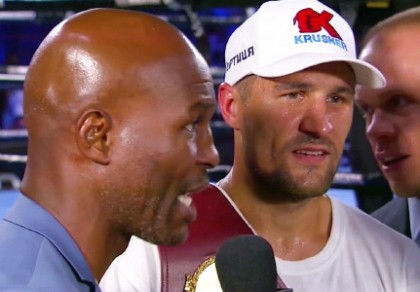 Pascal thinks he’d have an easier chance at getting a fight against the 31-year-old Kovalev than he would if Hopkins were to come out on top, because Hopkins defeated Pascal by a narrow 12 round unanimous decision in their rematch in 2011. Pascal believes that if Hopkins beats Kovalev, he’ll then go in another direction rather than face him.

Hopkins has a built in excuse for not fighting Pascal due to his victory over him.

“Kovalev is a good boxer and I want him to win. That’s because, if he wins, then I think that I have a better chance of getting a shot at him,” Pascal said via RingTV.com. “If Hopkins wins, then it’s going to be harder to get a shot at him because Hopkins knows that he got lucky. “I don’t think that he wants no part of me anymore. So he’s probably going to try to run from me if he wins.”

Pascal will be fighting on December 6th against the hard hitting Don George (25-4-2, 22 KOs) at the Bell Centre in Montreal, Canada. Pascal can’t afford to look past George, because he’s got the kind of power that could give him a lot of problems if George lands one of his heavy shots. Pascal is coming off of a win over a timid Lucian Bute from last January.

Bute fought like he was afraid to get hit for the full 12 rounds. Don George is a different story. He’s not going to be afraid to mix it up with Pascal, so this could potentially be a tough fight for Pascal.

Pascal will be facing WBC light heavyweight champion Adonis Stevenson in the first quarter of 2015. If Pascal wins that fight, and Hopkins beats Kovalev, then Pascal won’t have to worry about having problems getting a rematch with Hopkins. The fight will happen because Hopkins would be looking to get a chance at winning the last remaining title not in his possession at 175.