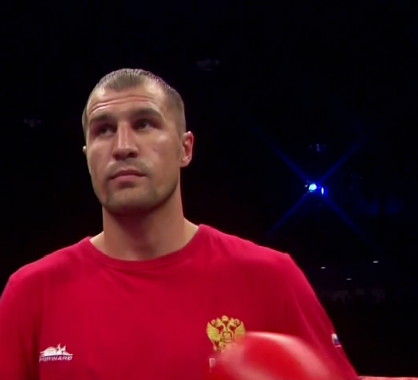 Kovalev says he wants to help the 49-year-old Hopkins retire by beating him to the point where it convinces him that it’s time to hang up the gloves permanently. Hopkins will be turning 50 in three months on January 15th, and Kovalev plans on making sure he still isn’t fighting when he reaches that birthday.

“I’m going to do everything I can to get the victory,” Kovalev said. “Alien sounds like the Russian word ‘Alen.’ For me, he’s a deer. Old Bambi from Mars. He’s still fast, smart, and also he has a good punch. This fight for me will be a big test. I will get a lot of experience from the fight against Hopkins, and I’m going to get two more titles. It’s my goal right now. My body is ready for 12 or even 15 [rounds]. How many do you need? I want to help him end his career, because he doesn’t want to stop himself,” Kovalev said.

Kovalev and his trainer John David Jackson don’t plan on falling into the same traps as Hopkins’ recent opponent Beibut Shumenov, Karo Murat and Tavoris Cloud did by failing to push the pace against the aging Hopkins. Jackson wants to make sure that Kovalev forces Hopkins to fight as hard as possible for 12 rounds in order to make him show his age like normal people do.

Kovalev has the youth and power advantage in this fight, but Hopkins is faster and more experience. Kovalev thinks he can make up for what he lacks in the speed and experience categories by using his power and aggression to wipe Hopkins out.

“He [Hopkins] might tell the general public ‘I’m in great shape.’ You’re an old man,” Jackson said. “I don’t care how he [Hopkins] perceives [himself] or what you’re saying about you being an alien. No, you’re a human being, an old man. We have to treat him like an old man. I tell Sergey every day, ‘You have to be the aggressor. You have to be the one that sets the pace.’ Once you let Bernard set the pace and he lures you in, guess what? Four or five rounds went by, and he’s doing his thing. Sergey can’t fall into that trap. ‘Oh my God, this guy’s 50 and he’s still here.’ Screw that. Knock this mother [expletive] out, and let’s get it over with. Bernard hasn’t been hit like this. I think once Bernard gets hit with the power this kid has, he’s [Hopkins] going to say ‘what in the hell did I get into this fight for?’”

Putting pressure on Hopkins for three minutes of every round is definitely one way of making Hopkins feel his age. Kovalev is going to need to try and stay close, because Hopkins is likely to use movement in this fight to keep away from Kovalev. The last fight in which Hopkins was in with a slugger against Kelly Pavlik in 2008, Hopkins used an in an out style to keep from getting hit by Pavlik’s big shots. He didn’t just stand in front of him like Pavlik’s other opponents had.

“Fear is written in your soul, your spirit and your body,” Hopkins said. “I fear nobody, and when you don’t fear no one, they fear you. They feel it. I see danger. I see someone who is coming to seek and destroy. Kovalev is a guy I have to be 100 percent focused like I always do. My body is so preserved that I can endure it [punishment] physically.”