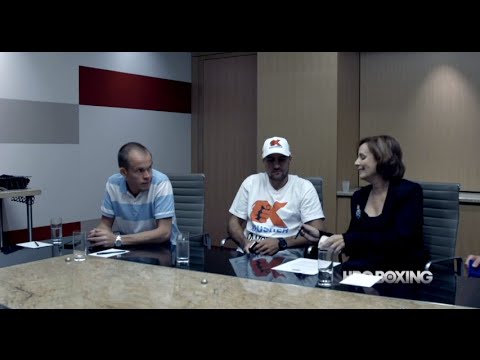 By Dan Ambrose: The conventional wisdom is that WBO light heavyweight champion Sergey Kovalev (25-0-1, 23 KOs) is going to need to use a combination of boxing and slugging in order to defeat IBF/WBA light heavyweight champion Bernard Hopkins (55-6-2, 32 KOs) on November 8th in order to beat the 49-year-old fighter in their match-up at the Boardwalk Hall in Atlantic City, New Jersey.

Kovalev surprised a lot of boxing fans recently when he revealed that he doesn’t have a set plan for what he’s going to do when he gets inside the ring with Hopkins. Kovalev doesn’t have a plan-A, B, C, D and E like most fighters do when they take on an opponent in an important fight. Kovalev says he’s going to come out and react to what Hopkins is doing, and come up with stuff on the fly.

HBO commentator Max Kellerman thinks Kovalev will be much better off if he comes out slugging and looking to take Hopkins apart with every shot rather than trying to box him. Kellerman sees Kovalev’s best chance of beating Hopkins is by fighting like he always does without thinking too much.

“As long as you have some tactical stuff in place for when Hopkins does X when a fighter does Y, and you take advantage of some tactical things,” Kellerman said to Jim Lampley’s ‘The Fight Game’ on HBO. “It’s good not to be in Kovalev’s head. If he starts thinking with Bernard Hopkins, as [Kovalev’s trainer] John David Jackson pointed out, it’s a wrap. Kovalev just has to fight and attack,” Kellerman said.

It’s going to be interesting to see if this kind of strategy will work for Kovalev if he elects to come out looking to slug with Hopkins rather than picking his spots to fight him. It might be better for Kovalev to try and score a quick knockout, because we saw that Karo Murat had success in throwing a lot of punches in his fight against Hopkins.

Murat was still too small, slow and weak to defeat Hopkins, but he was able to land a lot of shots. In contrast, Beibut Shumenov didn’t throw enough punches in his fight against Hopkins, and that made it easy for Hopkins to out-box him. Shumenov waited too long to let his shots go, and this enabled Hopkins to beat him to the punch.

Algieri will have his WBO 140lb title vacated for facing Pacquiao »