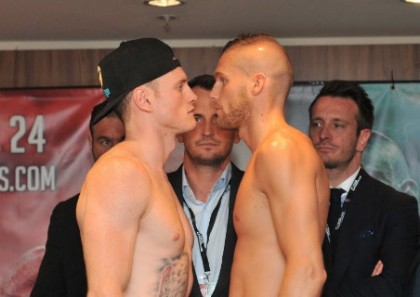 This is kind of a make or break fight for the 26-year-old Groves because the World Boxing Council are already throwing him a bone by letting him fight for an WBC super middleweight eliminator bout against Rebrasse off of back to back knockout losses.

I don’t know that this has ever been done before in the history of boxing for a fighter to get knocked out twice in succession and then being allowed to fight in a world title eliminator. It’s a real lucky break for Groves because I’ve never seen the WBC do this before, and I can’t imagine they’ll give Groves another chance of Rebrasse knocks him cold as well like Carl Froch did.

The WBC is already taking a lot of heat from fans for giving Groves the chance to fight in the WBC title eliminator when you’ve got a talent like #2 WBC Gilberto Ramirez (29-0, 23 KOs) being entirely skipped over by the WBC so that a fighter that’s been knocked out twice in a row like Groves can get another shot at a title.

Normally I wouldn’t give the light hitting Rebrasse any chance whatsoever in being able to KO Groves, but after the way that Groves was put to sleep in his last fight against Froch and buzzed badly in his stoppage loss to the Nottingham fighter last year in November, I wouldn’t be surprised at all if Groves gets knocked out by Rebrasse on Saturday.

The only thing Rebrasse needs to do is play it cool until the 7th round and then start sitting down on his shots. The combination of Groves’ poor stamina and shaky chin will do the rest for Rebrasse. Groves has problems with tall fighters as we saw with him getting knocked out twice by the 6’1″ Froch, and Rebrasse, 6’1″, is the exact same height as Froch. That extra height factor could be a major problem for Groves.

Rafael Garcia: Before they push me aside, I’m leaving Team Mayweather »