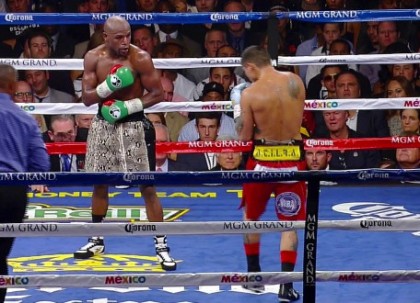 By Danny Esch: Welcome back to part two of my theory on the “blueprint” to defeat the great Floyd Mayweather Jr if you have not read part 1 I encourage you to do so to understand how we all reached this point.

In my opinion Floyd Mayweather has been so successful all these years because he has mastered the art of exploiting one of the boxing flaws which is “repetition”. If you have taken any boxing class you will find that there is a proper way to throw punches a proper way to guard a proper way to block a proper way to use lateral movement so on and so forth which means “repetitive” movements.

I believe Floyd Mayweather is the MASTER and he fully understands the art and science of boxing to the point where he knows what an opponent is going to throw even before they do and how to “react” to whatever punch they throw which in-turn means counter punching. It is said that Mayweather takes the first three rounds of each fight to study his opponent and I believe what he is studying is the opponent’s repetitive movement and repetitive punches in other words what the opponent is doing over and over again (Their game plan).

If my theory is correct than an opponent who is able to throw awkward punches and punches from different angles at different times is what will dismantle a person who is studying repetitions because their punches are not normal and they are not thrown in a normal manner so how can you prepare to defend that? YOU CAN”T what you have to do is dig deep and use whatever you have in your arsenal to avoid those shots coming from every place under the sun because there is NO clear repetition.

Now there are two fighters today who I believe can execute punches with speed and power in both hands and they have the ability to throw awkward angled punches at a high volume, and once again this of course is my opinion but I believe these two fighters are Manny Pacquiao and Keith “One Time” Thurman.

Although Manny is good in his own right and he has the ability to execute these techniques I think in the end he will fail because Manny does not know how to make adjustments. Manny Pacquiao is the type of fighter that is like a “Perfect Soldier” he is strong fearless and will follow orders without any back-talk 100% of the time BUT I believe that is also his down fall because he is the type of fighter that needs to be told what to do when to do it and how.

With all due respect Pacquiao has strong beliefs and a high level of respect for people like Roach, Arum, and Koncz but he is always “led “to his decisions even in the ring. On the other hand Keith “One Time” Thurman is a different animal he is more of a “super soldier” he has all the strength and ability of the “perfect soldier” but has the added ability to “think” and make decisions on his own. Keith Thurman has a different “hunger” in the ring than Manny Pacquiao because he knows he has something to prove and the tension is building because he is constantly being pushed down and ignored. In my opinion Manny will not win against Mayweather it will definitely be close but he has problems with guys that move i.e. Mayweather and problems with guys that can fight going backwards i.e. Mayweather.

Keith Thurman doesn’t have those problems and he can succeed at punching at different angles and when he lands there is power behind both hands and if Maidana can land punches against Mayweather than Thurman will have no problems what so ever doing the same. In conclusion just because a “blueprint” to defeat Floyd Mayweather hasn’t been found does not mean one doesn’t exist. I would like to see Mayweather vs. Thurman in 2015.

(Curve Ball to think and respond to) – With the talent available at 140 & 147 is it a coincidence that Floyd Mayweather has fought only ONE Black fighter since Zab Judah (2006) which was Shane Mosley (2010)? Shane Mosley actually had to force Mayweather to a fight by stepping in the ring after Mayweather vs. Marquez and confronting Mayweather face to face. Is there a different type of “FIGHT” when it comes to Black, White, Mexican, Puerto Rican, British, African, and Asian fighters”?

Adrien Broner said it best at the post fight interview in the ring after his fight against Emmanuel Taylor, Jim Gray of Showtime said “Broner was Taylor a lot tougher than you expected ”Adrien Broner: “Nah No disrespect to you Jim but he’s (Taylor) an African American I KNEW HE WAS GOING TO BE TOUGH”!

« Vasyl Lomachenko vs. Guillermo Rigondeaux: The fight to get the lower divisions recognised?