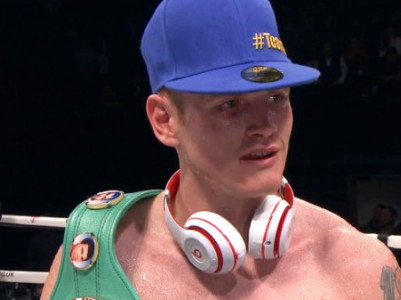 Groves was wobbled a couple of times by the light hitting Rebrasse and that’s really troubling. Both Carl Froch and Tony Bellew expressed doubts that Groves would be able to defeat WBC super middleweight champion Anthony Dirrell if that’s going to be his next fight.

I think the loss to Carl Froch last May, as well as the punishment he took in their first fight last year really took something out of Groves. He looked slower and less powerful than he was when he first fought Froch.

Groves, 26, is now the #1 WBC mandatory challenger to WBC super middleweight champion Anthony Dirrell. Groves may have to wait for a shot at Dirrell’s belt though because he’s got a voluntary defense coming up so we’re probably not going to see a fight between Groves and Dirrell until some point in middle to late 2015 unless the World Boxing Council comes through for Groves and orders the fight. You never know with sanctioning bodies. I mean, they agreed to let Groves fight in a WBC eliminator despite the fact that he’d been knocked out twice in a row in his last two fights.

Groves got a little lippy after the fight, saying to Froch “You beat me, Carl, but I still think I’m better than you. I’ve love to have another crack next year.”

Froch wasn’t having any of it, saying “Your down 2 nil.”

Groves said this about Dirrell: “We want him as soon as possible. He’s very disrespectful. I don’t think Dirrell will stand up to my shots. He says he doesn’t want to come to the UK. We’ll make him.”

« Mikkel Kessler expected to reveal next opponent in 10 days

Deserving fighters and the many belts »