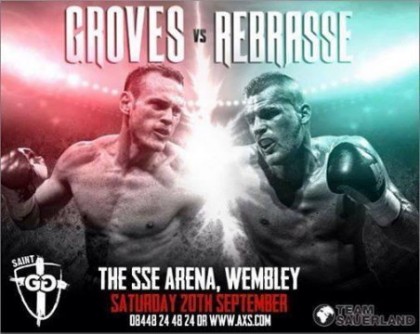 Groves sparred a little with Golovkin to get him ready for his title defense against Daniel Geale on July 26th, and Groves claims he did well during the sparring session. Groves didn’t say who got the better of who or if he was injured or knocked down during the session, but evidently Groves came away the sparring session with confidence that he still has it after his back to back knockout losses to IBF/WBA super middleweight champion Carl Froch.

Groves will be fighting #3 WBC Christopher Rebrasse (22-2-3, 6 KOs) this Saturday night in a WBC 168lb title eliminator bout at the Wembley Arena in London, UK. The winner of that fight will be the WBC mandatory challenger to WBC champ Anthony Dirrell. Groves feels like he matches up with the powerful and very speedy Dirrell, but I’m not so sure.

For Groves to have a chance of beating Dirrell, he’ll need to be able to handle getting nailed with punches just as hard as the shots Froch knocked him out with on two separate occasions. Given that Dirrell is a heck of a lot faster than Froch in terms of hand speed, I just don’t see Groves doing well at all against Dirrell.

“He [Golovkin] can hit hard. You wouldn’t want to give him any free shots,” Groves said to IFL TV. “He’s a compact fighter. He packs a punch. He definitely hit me with a few shots and I hit him back with a few shots. It was a priceless bit of sparring. If there was ever any doubts about myself and my ability, my temperament, my mind, my water to go back and spar with a world champion, one of the best pound for pound, who was a week away from his fight [with Daniel Geale] and spar well,” Groves said.

There’s some things to factor in when you look at the Groves-Golovkin sparring session. We don’t know if Golovkin was taking it easy on Groves due to him having been recently been knocked out by Froch last May. There’s always the distinct possibility that Golovkin took it easy on Groves by keeping it in neutral rather than going all out on him. The other thing to realize is that it’s sparring, not actual fight.

Groves obviously was wearing head gear and Golovkin likely had on big 16 ounce gloves. It wasn’t like a real fight, and it’s highly unlikely that they sparred for any more than 3 rounds at best. Groves likely didn’t have his questionable stamina tested with the sparring session going beyond 6 rounds. That seems to be the magical number where Groves fades and starts falling apart in his recent fights.

Rebrasse feels confident that he’s going to be able to KO Groves by getting to his fragile chin early in the fight. “I will beat Groves inside the distance or after the final bell but I am confident I will win. I’ve come to London as the champion and I will be leaving as the champion,” Rebrasse said.

Mayweather: Ellerbe and I are outgrowing each other, I am changing my team »