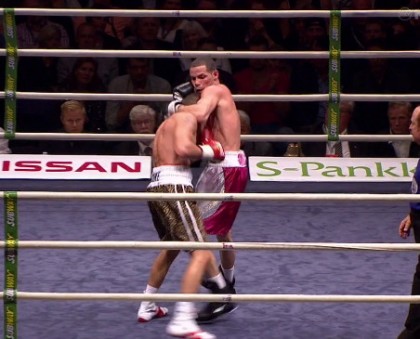 A more accurate score for the fight was 117-111, but even that score was far too kind because the 32-year-old Abril beat Tatli in a far more decisive manner than those scores would suggest.

Tatli fought well enough to deserve 1-2 rounds at best, because he was throwing wild shots and missing badly all night long. The only round where he appeared to connect with some of his crude punches was in the 6th, and he only connected with a few of the punches.

Abril did a good job of tying Tatli up when he’d try and crowd him to throw his power shots. Tatli reminded me of an even cruder version of Marcos Maidana. At least with Maidana, he’s got some good skills and has a nice jab.

Tatli was just wild with his hooks and he never threw any jabs. It was haymakers from start to finish with him missing badly and getting picked off again and again by Abril.

Abril’s shoulder roll defense was superb in the fight because he did a great job of picking off numerous punches by Tatli. When Tatli would get close enough to throw from point blank range, Abril would lean backwards the way that Mayweather likes to do and make Tatli’s punches miss badly.

The only shots that Tatli was able to land was his left hooks from time to time, but never on a regular basis. He just didn’t have the accuracy to connect with Abril’s head.

It would have been a lot smarter for Tatli to focus his punches to the body at some point, because he just couldn’t land anything to the head. Unfortunately for Tatli, he rarely threw any body shots in the fight. It was all head shots and it was a waste.
Other boxing results on the card:

The generation of the Prince »