Chaves: Rios was using his head like a third punch 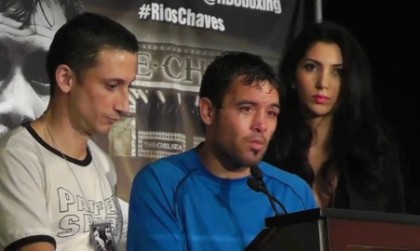 By Allan Fox: The tough Argentinian fighter Diego Chaves (23-2, 19 KOs) says he absolutely wants a rematch against former WBA lightweight champion Brandon Rios (32-2-1, 23 KOs), and that he’s willing to fight him anywhere he likes, as long as referee Vic Drakulich isn’t going to be working the fight against. Chaves lost last Saturday night to Rios by a 9th round disqualification in a fight that Chaves was leading by the scores of 75-74, 75-74 for Chaves, and 75-74 for Rios at the Cosmopolitan of Las Vegas, Las Vegas, Nevada, USA.

Chaves had two points deducted by Drakulich during the fight before being disqualified in the 9th. Without Drakulich taking 2 points off of Chaves, Rios would have been in a near hopeless situation going into the 10th round.

As it was, Rios was already trailing by 1 point. If you subtract Drakulich’s questionable point deductions, Rios could have been going into the 10th round needing to make up a lot of points. It would have been a nearly unwinnable fight for Rios.

“Being rough is not one of my skills,” Chaves said to Radio Raheem. “I always fight clean. I think, yes, we need a rematch because I was teaching him how to box. The Argentinean people know that I was fighting two fighters – Rios and the referee.”

The odds of Chaves getting a rematch with Rios aren’t very good. Rios doesn’t make his fights, Top Rank Promotions does. And they’re probably not going to want to risk putting Rios back in with Chaves in a second fight given the tough time that Chaves gave him.

If nothing were to change with Rios’ fighting style in a second fight with Chaves, he’d likely be the one having multiple points taken off from him for the use of the head, because he was head-butting Chaves throughout the fight. Very few referees would have let Rios smash his head into Chaves’ face during clinches in round after round. We saw Rios getting warned last night by Drakulich but he never had any points taken off. Rios would have to change that way of fighting in a rematch unless he were to luck out again by having another referee that doesn’t penalize for head-butts.

Chaves said “It was a clinch. His head was under my arm. I never wanted to put anything in his face or his eye. His head was like a third punch. He did what he wanted to with his head. Truly, I don’t know [what he had done to be disqualified]. I was taking head-butts and rabbit punches. I don’t know what I did. It was a dirty fight. He made it a dirty fight. They think he’s a big shot, a big guy, a good guy. And I was teaching him, and I feel like it was unjustified the way I was disqualified. Yes, [I think I won], truthfully, I was hitting him whenever I wanted to. Yes, I want to fight [in the U.S again], and against Brandon Rios. But truthfully, they need to change the referee, because it was a disgrace what they did with me. Yes, [I’ll fight Rios] wherever he wants to, even at his house.”

« Overcoming the fear of Kovalev and Golovkin

The Myth becomes a Legend #2 »