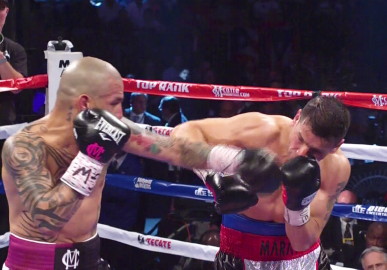 By Dan Ambrose: Sampson Lewkowicz, the adviser former WBC middleweight champion Sergio Martinez (51-3-2, 28 KO’s), says that the 39-year-old Martinez likely won’t be retiring from the sport just yet following his 10th round stoppage loss to Miguel Cotto last Saturday night. Lewkowicz says that if Martinez does retire, it won’t be a sudden thing where he just stops completely following a loss. Instead he’ll have a farewell fight in front of his fans in Argentina before stepping away from boxing.

“Having been the best, he will want to make a farewell fight for his fans,” said Lewkowicz to Primera Hora. “If he is to continue, it will be to make a fight in Argentina. Sergio is smart, and he’ll have no problems doing other things.”

As bad as Martinez’s knees looked in that fight, he should spend another 6-8 months rehabbing his knees with a professional trainer that works in helping football players come back from knee injuries.

If Martinez can start his rehab all over from scratch, he might be able to bring his knee strength back to close to where it was before his knee injuries. At least if he tried to get his knees back, he could perhaps go after one of the other middleweight champions to pick up a strap from Peter Quillin or Sam Soliman. Cotto likely won’t bother fighting him again, and there’s no surprise there. With the way Martinez got bludgeoned by Cotto, fans would never want to see a rematch between them.

“From when he fell in down from the first assault in the 1st round, he could never shake off the blow,” said Lewkowicz about Martinez being hurt from the initial left hook that Cotto hit him with in the 1st round. “He tried to continue for eight rounds and a half, but he felt dizzy. He tried to pull his left foot but he felt resistance. He never recovered but he fought with his heart.”