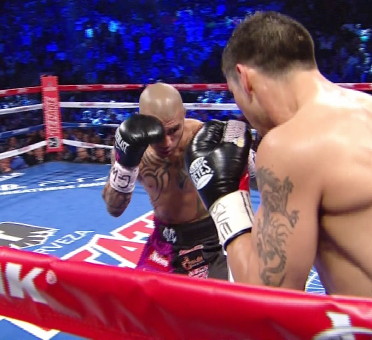 By Wepeeler: So I’ve let the dust settle from what was a monumental Miguel Cotto (39-4, 32 KO’s) win over WBC middleweight champion Sergio Martinez (51-3-2, 28 KO’s) last Saturday night at Madison Square Garden, in New York. I had watched and read all the pre-fight hype, and I’ve followed all the post-fight action as well. There seems to be an overabundance of people claiming that Sergio knees were shot and that Cotto should have an asterisk next to his Middleweight championship. This is straight ridiculous.

First off, Sergio was the lineal middleweight champion. He beat the guy who beat the guy. And he BEAT guys down. He was often undersized and seemingly over-matched, but always came out victorious during a very impressive run that included Kelly Pavlik, Paul Williams, Sergey Dzinziruk, Dennis Barker, Matthew Macklin and big boy Julio Cesar Chavez Jr. He looked a bit rough in the Murray fight but look at the list of fighters he had just fought! Murray is a big strong ox, and Martinez still found a way to win. I say all this, because Martinez was the true lineal middleweight champ. Martinez vs. Gennady “GGG” Golovkin never happened, and although GGG owns part of the strap, he’s NOT the lineal middleweight champ. Martinez had been calling out Cotto for years, looking to fight the smaller Cotto instead of defending his title against Peter Quillin, Daniel Geale and Golovkin.

Now onto Cotto’s victory over Martinez. The main reason Cotto won was that he hit Martinez flush early in the 1st round and was able to seriously hurt him and knock him down 2 more times. Martinez said so with his own mouth. He was hit with a shot that he didn’t expect, and he was never able to recover. These people excusing Martinez of the loss due to his bad knees clearly weren’t watching HBO’s 24/7 where Martinez was working those “rusty” knees out like a 20-year-old meat head in the gym. Clearly they weren’t watching Martinez jumping and bouncing in the ring directly prior to the fight. His knees were fine until he got cold-clocked. His knees buckled, and he went down. This is boxing and these things happen. Crazy, isn’t it?

Cotto’s trainer Freddie Roach put together a masterful plan against Martinez. Martinez fights with his hands down and gets hit pretty often. Leaving that right so low left Cotto’s money punch, the left hook, there all night long. I truly believe that Martinez didn’t expect Cotto to have so much power or to pressure him so early on.

Cotto was mentally and physically conditioned to adapt to anything Martinez brought to the table. Martinez was one dimensional and that was the difference in the fight. All the trash talk from Martinez during the build-up and 24/7 episodes went out the window as soon as the bell rang, and Cotto did what he was trained to do. Fight.

Sergey Kovalev vs. Blake Caparello on 8/2 on HBO from Atlantic City, NJ »