Bradley and Pacquiao both lost 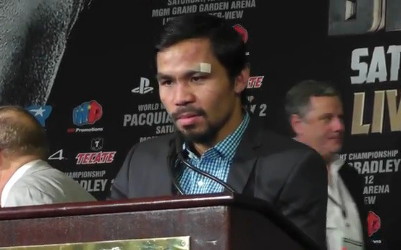 By Robert “Big Moe” Elmore: Tim Bradley had it all for at least two fights. He scored a very controversial win over Manny Pacquiao in their first fight and proceeded to beat Ruslan Provodnikov and hall of famer Juan Manuel Marquez. But then he came to a fork in the road. He had the WBO strap around his waist, his contract had expired with Top Rank, had a chance to become a free agent, and possibly align himself to fight Floyd Mayweather Jr.

But he wanted to prove to the world that he really did beat Pacquiao in the first fight and couldn’t get the rematch without first signing an extension. He mulled things over and finally decided to resign stating Top Rank gave him everything he wanted. Then it was on to the fight. What Bradley displayed last night was nowhere what I know he’s capable of doing. He was doing pretty good the first few rounds, but seemed to ease up off the gas. He was winging punches, looked amateurish at times, and looked gassed out during the middle rounds.

Bradley looked to be going for the knockout. Was there some element of fear there that he might get a taste of the medicine Pac got in the first fight? Whatever it was, it cost him the fight and a lot more than that. There was a ten million dollar guarantee immediate rematch clause in the contract from their first fight (which was not honored by Top Rank because they said there was no money there).

In my opinion, the money was never going to be there especially when it comes to pay per view and upfront cash (monies given before the total revenue is tallied). Marquez was promised the same thing had he won his third bout with Pac. The most any Top Rank fighter made upfront (in the 2000’s) was the 7.5 million Pac received against Oscar De La Hoya and Miguel Cotto. Instead, he got six million. But now Bradley will be stuck on the ferris wheel of recycled fights until his contract on Top Rank expires.

For Pac, he has didn’t look that great until the second half of the fight. But there was truly something missing from him. The heart and the will were there, but the passion seems to be gone. The knockout by Marquez still has lingering effects on him. He was a little gun shy. Nonetheless, he took full advantage of Bradley’s foolishness and put just made the Floyd fight hot again. Pac now is now in the position that Bradley was in before he signed his extension. He has the WBO belt back around his waist, he has one more fight on his current contract that will expire in December of this year, and can become a free agent. However, the public will forced to watch him take another Top Rank stable mate. The most likely will be a 5th fight with Marquez. But if he signs another extension, which I hope he doesn’t, there will be a rematch with Bradley, followed by a fight with Mickey Garcia, and he’ll wrap things up with a fight Mike Alvarado.

Pac can walk away and do business with Floyd without the services of Top Rank. He and Bradley’s base purse was 6 million dollars ). He doesn’t even have to fight Floyd right away. He can do a fight by fight contract with whomever he wants. It remains to be seen how this all plays out.

« Pacquiao: The line is open for Mayweather to call 24 hours a day

Pacquiao: “My next move depends on my promoter Bob Arum” »