ASHLEY THEOPHANE: FROM HERE TO ETERNITY 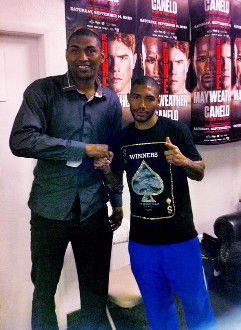 It’s really great and satisfying to be back in Las Vegas with Mayweather Promotions, as nothing beats training at the Mayweather Boxing Club. Putting in quality work with my trainer Nate Jones, and of course, watching Floyd Mayweather prepare for his upcoming clash with Marcos Maidana.

It’s impressive and instructive to watch Floyd workout, and always motivating at the same time. He always pushes himself hard, be it on the heavy bag, body work with Nate or pads with Roger. The man is incredible; he’s just turned 37 and still strives to be a better fighter. When Floyd eventually retires, he will be sorely missed.

I’m pleased and privileged to be a part of his team. He’s brought me into his world and treats me like family. All he asks for is for me to give him my best – all of the time. He’s shared with me the superstars in the boxing world he believes I can fight and beat.

I’ll continue to work as hard as I can, as I also believe I can improve and become a world champion one day soon.

On Friday we had a team meeting where Floyd and Leonard Ellerbe, CEO of Mayweather Promotions spoke to the fighters over dinner. Listening to these two men who have accomplished so much during the 18 years they have worked together, tell us what they expect from us and how much they believe in the team. It was inspiring and motivational.

Saturday at the MGM Grand Casino, Floyd held a press conference about his fight with Marcos Maidana. It is titled “The Moment”. It’s going to be a great fight and I’m looking forward to watching it.

Floyd announced during the press conference that my team mate, Ishe Smith, will be challenging Erislandy Lara for his WBA world championship, the night before his fight. The fight fans in Las Vegas are in for a treat. Two nights of great action.

Later that evening Saul ‘Canelo’ Alvarez fought Alfredo Angulo in the MGM Garden Arena. It was a very hard fight, but as Floyd said this week “Losing to me is not a loss, it’s a learning experience”. Canelo bounced back in an entertaining fight, and it looked like he had been studying some of Floyd’s defensive moves.

Sometimes I like to reflect on life in general and my career. How far I’ve come and how far I have to go. I used to ask myself “why would a boxer come to Las Vegas for training camp?” There are all of these distractions, but I’ve now realised it’s a test to see how much you really want to achieve your goals. I’ve got a huge desire and a raging fire burning inside of me. From the start of my boxing career I’ve had my doubters, and still do, but that just spurs me on now. From beating former world champion, DeMarcus Corley, and two time world title challenger, Delvin Rodriguez to dropping split decisions to world champion, Danny Garcia, and two time world title challenger, Pablo Cesar Cano. Fighting on the biggest PPV boxing event ever at the MGM Grand Casino, being in hundreds of magazines across the UK, sparring 20+ rounds with Floyd Mayweather and being promoted by Mayweather Promotions. I’m doing absolutely everything I wanted to do as a child.
They can laugh at me when I have a setback, but that’s part of life – I just dust myself off and continue to move forward.

Everybody wants to be a star but the hard work, dedication and sacrifices required to get there works to separate out those who really have the determination and perseverance to stay the course, from those who just have dreams.

I’ve fought and won in FIVE different countries as a professional boxer; America, Luxembourg, Germany, Saint Lucia and the UK.
I’ve won 34 professional fights and have been ranked world number 4.

I’ve got a great team behind me. It’s now only a matter of time – we WILL get there.

« Sergio Martinez expects to KO Miguel Cotto before 9th round

Khan bragging about his new power »